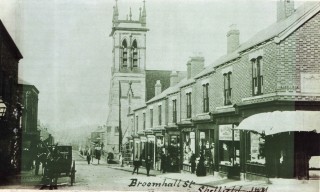 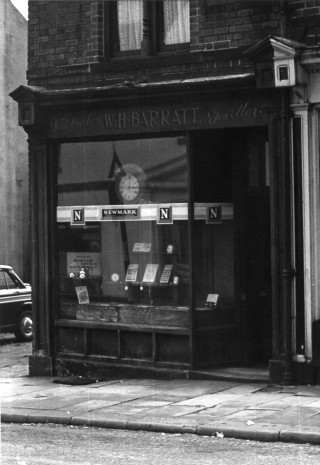 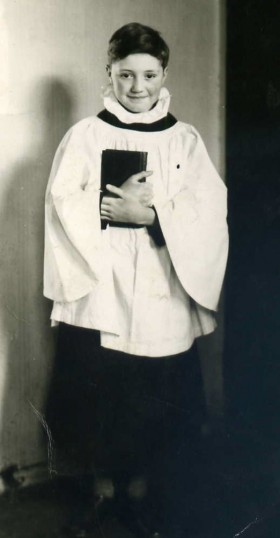 Roger first contacted us after seeing our article in the Sheffield Star that included the 1901 image of St Silas and the shops in Broomhall Street (see right):

“My name is Roger Barton and I am an expatriate Sheffielder Iiving in North Devon.

I was born in February 1946 and lived at 7 Clinton Place until my father died in 1959 when I was thirteen years old.

My sister and I were baptised at St Silas, and I became a St Silas Cub Scout when I was seven, eventually becoming the pack’s Senior Sixer before joining the St Silas Scouts when I was eleven. When I was eight I joined the St. Silas choir and became its regular soloist and then Altar Boy under the Rev Haythornthwaite up to his retirement, followed by the Rev Hayward (photo on the right– me aged ten; my hair was auburn – don’t be taken in by the angelic appearance!). My involvement with the church ceased in 1960 when my mother remarried and we moved to Coal Aston.

My grandfather, Walter Henry Barratt, had a watchmakers and jewellers shop in the terrace of shops on Broomhall Street, between Hanover Street and William Street. His premises were the fourth shop down from the William Street corner (see photo on the right). My uncles Frank and Christopher also worked at the shop before WW2 and then until their retirement – at which time I believe the properties were compulsorily purchased.

Although the 1901 photo in The Star shows an entire terrace of shops between Hanover Street and William Street, when I was a boy there was a demolition space adjacent to my grandfather’s shop on the lower side, and within the remaining terrace one shop had been converted to a house, which was at that time occupied by the Gorham family. I remember my contemporary, Bryn Gorham (whom I believe is/was a painter and decorator living in the Greystones area).

My grandfather and grandmother had eight children: four sons and four daughters. The boys were all St Silas Scouts, and there used to be regular gatherings at the family home at 107 Broomspring Lane, where my grandmother would bake giant meat and potato pies for the whole scout troop to enjoy.

St Silas church, and the church hall on Hanover Street, were focal points of my life as a boy : Two morning services on Sunday, followed Sunday school at St Silas school with Mr Wilson, and then Evensong; choir practice on Thursday evenings; cub and scout meetings; snooker in the church hall on Friday evenings; and Saturday jumble sales often. (When I reflect on what I have just written here it seems rather strange that I have been a full-on atheist since I was 22. I have never really thought about it from that perspective before.)

Also, the second shop down from William Street was Richard ‘Dick’ Baker, the butcher, and from the age of thirteen to seventeen I was his Saturday delivery boy.”

We asked Roger if he could remember more about the shops in the 1901 Mottershaw photo and about which school he went to:

“W H Barratt, Watchmaker and Jeweller, was the fourth one down from the right of the picture. My grandfather took it over in the inter-war years and it was occupied by the Barratt family business until the property was compulsorily purchased for redevelopment (not sure what year that was). Granddad died in 1951, and from then on the shop was run solely by my uncles Frank and Christopher. My direct knowledge of the area extends from c.1949 when I was three (yes I can remember back that far) and the mid 1960’s.

Referring to your photo, the corner shop on the right was Fred Higgins general grocers. The second shop down was Richard ‘Dick’ Baker, butcher’s shop (where I had a Saturday job from 1960 to 1963). The third shop down was a cobbler’s shop; I can’t remember his name but I do remember that he was a member of the Communist Party. The fourth was Barratt’s. Then there was a demolition space, which, from the photo I would say was two shops and one house wide, leaving two houses at the bottom next to the newsagent’s on the corner. One of those houses was occupied by the Gorham family.

You also asked which school I attended. I went to Pomona Street County School and then Greystones Secondary Modern, before going to the Central Technical School. The latter involved a walk the full length of Broomhall Street every day (The CTS was at the back of the City Hall, next to the City Grammar). Most of the children at the upper end of the Broomhall district, including William Street and Clinton Place, attended Pomona Street school. I recollect that only one child on William St (David Duckenfield) went to Springfield School. As far as I can remember, all the children residing beyond the Hanover St intersection went to Springfield or St. Silas. My mother (née Constance Barratt) and her seven siblings grew up on Broomspring Lane and attended Springfield School.”

Do leave a comment below if you remember any of the people or shops Roger has mentioned.