You are here: Home>Explore OUR Broomhall>Topics>Animals>The Broomhall Calendar 1983: February ~ Making the Flicks 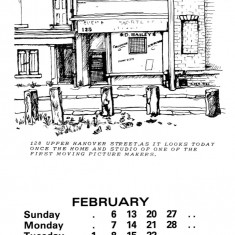 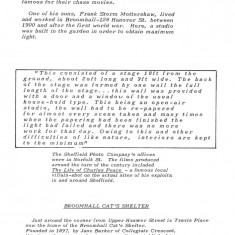 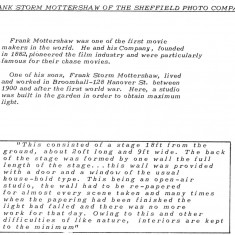 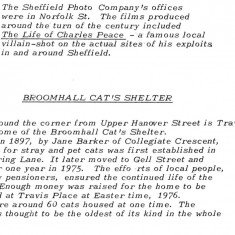 The title of the February page of the Broomhall Calendar, produced in 1983 by the local history group, is ‘Making the Flicks’. The first section of page 2 talks about movie maker, Frank Mottershaw, whose son Frank Storm Mottershaw lived in Broomhall at 128 Hanover Street, a house that is no longer there, replaced by more modern housing. Another of their family members, John William Mottershaw, included photos of Broomhall in his photographic collection of Sheffield.

One of the first films ever made by the Mottershaw’s was about the notorious Sheffield criminal Charlie Peace. Charlie Peace was defended in 1879 at his trial by William Edwin Clegg, a resident of Broomhall Park during that time. The page also mentions the Sheffield Cat Shelter, on Travis Place in Broomhall.