The Broomhall Riots of 1791

They Burnt his Books!

“Within three years of the fall of the Bastille in 1789, Sheffield had emerged as one of the strongest centres of popular radicalism in Britain’”

So said John Stevenson in his book Artisans and Democrats: Sheffield in the French Revolution 1787-97.

Broomhall was no exception to this. In fact, such radicalism and zeal for reform is embodied in one particular example that happened in Broomhall as early as 1791 – the famous Broomhall riots. 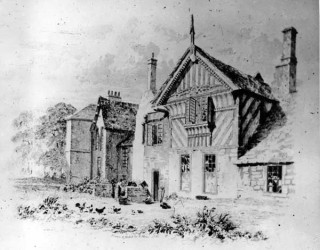 In June 1791, it was announced that the enclosure of 6,000 acres of common land was to happen in the next month. David Price, in his book Sheffield Troublemakers: Rebels and Radicals in Sheffield History, states that, according to Parliament at the time: “98.3% of the landowners in the area to be enclosed had given their consent but they alone stood to gain.”

Those who would fare worse from the enclosure acts were the “landless poor, who lost their historic rights to pasture for geese and animals, access to footpaths and wild fruit and much else besides.”

On July 13th, appointed commissioners were to meet to start the initial surveying of the common in order to execute the act. On 24th June, the Sheffield Register released a report announcing this intention, entitled ‘Inclosure of Hallams’:

“And the said commissioners do hereby give further notice that they do intend to meet at the sign of the sun, Bentsgreen in Ecclesall on Wednesday the thirteenth day of July next, at ten o’clock in the forenoon, for the purpose of beginning the perambulation of the OUT-BOUNDARIES of the said commons and waste grounds, within the said several townships, where all persons interested or concerned therein are defined.”

Revolution was not unlikely given the era, and how high the stakes were. The French Revolution of 1789 was fresh in people’s minds (though it had yet to become so bloody), and riots in Birmingham earlier in the year meant that unrest was a constant worry for those in power.

It is little wonder then, that on July 23rd, the three ‘Inclosure Commissioners’ – Vicar James Wilkinson, Vincent Eyre and Joseph Ward, the master cutler – wrote to the Home Office in great distress.  According to Price:

“They feared that the Birmingham Rioters had ‘worked on Sheffield passions’.”

The commissioners asked for ‘military aid to suppress the rioting of “many profligate people”’. As detailed by David Bentley, author of The Sheffield Hanged 1750-1864:

“The Home Office immediately made arrangements for a troop of light dragoons to be sent from Nottingham.”

They arrived at noon on Monday 27th July. The Sheffield Register reported that:

“The sudden news on Wednesday morning, of a party of soldiers being expected in town, excited the alarm of some, and the curiosity of all. A great concourse of people went out to meet them, and on their entering the town, the streets were lined with the populace.”

The arrival of troops was, therefore, something of an unusual phenomenon for those who lived in Sheffield up until this point. Arguably, it was this that provided a catalyst for the violent events that occurred after their swift arrival, those which the Register elaborates on here:

‘’The unthinking multitude, thus successful in their first outrage, pursued their violence. Broomhall was now the cry – the house of Rev. Mr. Wilkinson our vicar. All his windows were broken, part of his furniture and library damaged and burnt, and eight hay ricks set fire to, four of which were entirely consumed. Before the populace had been too long at Broom hall, they were followed by the Light Horse who presently dispersed them.’’

More recently, Bentley too offers a thorough account of the riot, following the arrival of the Dragoons:

‘’The atmosphere was highly charged and many hung around in the town centre to see what would happen. By 9pm there were hundreds of people milling about in front of the Tontine Inn.‘’ 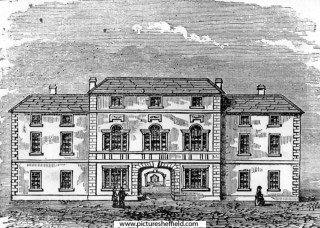 ‘The trouble, which all had been expecting, erupted when Joseph Schofield, bailiff of the Sheffield debtors gaol [situated on Pudding Lane; now King Street] arrested a man for debt outside the Tontine. The crowd at once intervened and freed him and he ran off.

‘Schofield didn’t let the matter drop and he ended up taking refuge in the jail which the mob had started to pelt with missiles (a pile of stones intended for pavement repairs).’

‘Soon after, the crowd, who were shouting ‘Pull it down!’, forced the outer gates and began to beat on the door of the gaolers house demanding the keys. These were passed out, the inner gate opened and the gaol’s 19 or 20 prisoners released.’

‘At this point the Dragoons arrived and the mob took to their heels.’

David Price recounts this moment, saying that, ‘There were then calls ‘To Broom Hall’ – the grand house where the Vicar lived.’

Bentley continues his account saying that the mob was heard ‘coming along Backland Lane (now Broomhall Street) shouting “All in a mind.”’

Reverend Wilkinson was met by his servant, John Gregory, who warned him of the mob and together, they rushed off to the hall. According to Bentley, ‘Inside the Vicar found a letter waiting for him; it had been sent from the Tontine and warned of danger. After reading it, he got back on his horse and rode away, leaving Gregory in charge of the building.’

‘Gregory put out the fires in the grates, closed the shutters and prepared for the worst. The mob now appeared in green at the front of the house. They were shouting “All in a mind” and one of them was playing a tambourine; they started to stone the house. Gregory at once retreated to the haystacks, a hundred or so yards away. Already hiding there was Henry Jenkins, the Vicar’s coachman.’

‘Some of the rioters were by now inside the house starting a fire in one of the downstairs rooms. After about ten minutes, Gregory and Jenkins saw three men approaching the stack […]. They went to one of the stacks; two pulled off straw and the third set it alight using either a candle or a torch.’

‘As the torch caught fire, they shouted “Damn it, there he goes!” They then moved to the second stack and fired that. Once four stacks were alight they retreated a short distance but soon returned, shouting “Stick true! All in a mind,” and set fire to the rest.’

‘At this point the dragoons came clattering along the lane and the mob at once dispersed, many of them running into nearby woods.’

‘About ten minutes after they had gone, Gregory, who had taken refuge in the house of the Vicar’s neighbour, Mr Spooner, emerged from his hiding place. The stacks were by now well ablaze and beyond saving and he went straight into the Hall.’

‘In the Breakfast Room, there was a badly burnt mahogany table, upon which books and pamphlets and newspapers had been piled and set alight.’

‘One of those who had helped to extinguish the fire was Charles Clement. He had seen the mob go past his home in Church Lane and had decided to follow them.’

‘When he arrived at the Hall the dragoons, whom he had earlier seen pursuing rioters along Change Alley, were already there.’

‘He made his way inside the building, which was full of suffocating smoke and eventually managed, by copious use of water, to put out the flames.’

This was much less serious than the attack on Broom Hall, however, and there was no serious damage incurred.

The incident in Broom Hall meant that ‘the magistrates swore in hundreds of additional constables and two troops of heavy dragoons arrived from York.’ The attack is further credited for the creation of the Sheffield Garrison. Bentley states that ‘In July 1792, work began on the construction of barracks on a site at Philadelphia beyond Shalesmoor, banded by what are today Infirmary Road, Penistone Road and Barrack lane.’

‘White’s directory for 1833 explained to readers that they had been built:

“as a means to keep the peace and quelling any uprising and for the purpose of awing the threatening aspect of the people who had long been clamorous for reform in parliament and had several times evinced their joy on receiving intelligence of the successful progress of the French Revolutionary Armies.”’

In addition to these added security measures, one rioter was hanged for his offences during the attack on Broom Hall. An 18 year old apprentice called John Bennet was one of five boys carted off to York, to be tried for their involvement in the riots. Bennet was one of two tried for both riot and arson.

As stated by Bentley, ‘Bennet was the first to be tried. Crown counsel, in opening the case against him, told the jury that the prosecution had been undertaken by the government who were determined to spare no expense in bringing to justice those who should be guilty of the offence with which Bennet was charged; that they had selected him as a fit object of punishment, as being the person who had actually set fire to the house of the magistrate and, though on any other occasion, his youth might entitle him to some hopes of mercy, yet the enormity of his present offence was such that to save him would be to encourage crimes; he sincerely hoped that if the prisoner was found guilty his punishment would operate as a solemn lesson to the unthinking men who had been concerned in the riots in Sheffield.’

‘Bennet offered no statement in his own defense but left the case to his counsel. His master John Walker was called. He had taken Bennet as a parish apprentice and he had three years left to serve. During the last months he had been very steady and he would take him back again if acquitted.

‘Slater’s evidence, which afforded some slight confirmation of that of Ellis, appears to have been enough to satisfy the jury that the latter was telling the truth and they returned a verdict of guilty. Baron Thompson, passing a sentence of death, told Bennet that the good government of the country required that he be shown no mercy.’

‘Bennet was hanged on Saturday, September 6, along with John Minitor, a Rotherham man convicted of arson of a barn, and Abraham Robertshaw, a forger.’

Though Bennet paid a high price for his crimes, Price states that, regardless of any protest against it, ‘Enclosure went ahead unchanged though somewhat later than intended.’

Vicar Wilkinson lived on until 1805, though it is reported that the incident in 1791 shook him and that he subsequently ‘kept clear of the ‘more profligate’ elements in the town for the next year and lost his enthusiasm for parliamentary reform.’

An episode, recounted by both Price and Bentley, indicates this somewhat volatile nature between Vicar Wilkinson and the populace, demonstrating just how shaken he had become following the riot at his house.

‘A little girl was incited by a mischief-maker to recite to him Mather’s lines:

They Burnt his books,
And scared his rooks
And set his stacks on fire.

He sent the girl to the stocks.’

‘Later in 1790’s, he accepted the leadership of a loyalist association in Sheffield to counter seditious ideas.’

The impact on the Vicar himself shows just how pivotal the riots were in 1791, cementing the idea of Sheffield, and indeed Broomhall itself, as a centre for activism and protest against those who would seek to gain from the losses of the general public.

Read about the History of Broom Hall