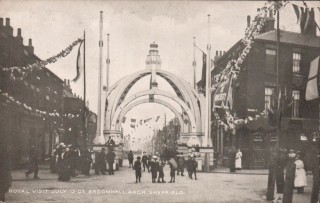 'Broomhall Arch': constructed for the Royal Visit to Sheffield on 12th July, 1905
Photo: OUR Broomhall 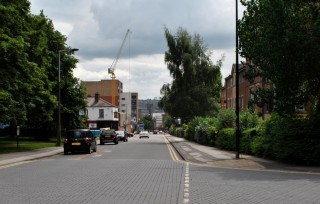 Fitzwilliam Street (2014): site of the 1905 'Broomhall Arch' for the Royal Visit
Photo: OUR Broomhall

Last year we did a search on ebay for anything Broomhall related and came across this amazing postcard showing the ‘Broomhall Arch’ which was assembled on Fitzwilliam Street for the occasion of the royal visit to Sheffield on 12th January 1905.

King Edward VII and Queen Alexandra visited Sheffield to mark the opening of the University. This occasion was also in aid of a visit to a munitions factory. The path of the procession of the King and Queen throughout the city was decorated with elaborate arches. One of these arches was constructed on Fitzwilliam Street, which now runs alongside Devonshire Green. This means that the King and Queen passed through the Broomhall area, presumably on their way to the university where they were received by an audience at Firth Hall.

If you look carefully you can see an ‘Opening the University’ banner hanging from a house in the right of the picture. You can also just make out the street sign ‘Broomhall Street’, which is the road going off to the right.

After we bought this picture we searched the Picture Sheffield website to find if there were other pictures like it. All we could find were of the same scene but instead it was called ‘Fitzwilliam Arch’.

Some of our project volunteers went out to try to work out where this scene took place on Fitzwilliam Street. Broomhall Street heads out to the right of the picture but the main road where the arch is is looking down Fitzwilliam Street towards the bottom of the Moor. Here is our photo of what it looks like now (taken in 2013) standing in roughly the same place as the 1905 photographer.

The 1905 postcard is a great image of the people that lived in Broomhall at that time.