Here is Sheffield Jesus Centre. This photo shows its site on the corner of Broomspring Lane and Hanover Way. 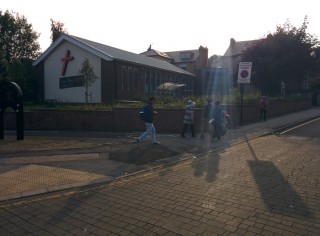 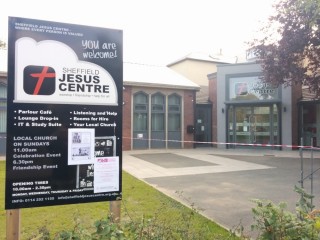 All sorts of things happen at the Jesus Centre.  Have a cup of tea or lunch in the Parlour Cafe, bring your children to the Stepping Stones parent, baby and toddler group, paint a picture in the art group.  Come to literacy and numeracy lessons to build up your confidence with these things, come to some formal IT lessons or just borrow a computer for half an hour.  If you’ve recently arrived in the country come to ESOL (English for Speakers of Other Languages) classes and New to the UK.  Fuel Stop is a businessmans’ breakfast on a Wednesday morning before they go to work.  The lounge is open to everybody.  Come in for a free cup of tea and to make friends with people.   People come here from all walks of life, councillors, doctors, nurses, teachers, the unemployed and from all nationalities.  The centre welcomes a large multi-racial congregation with Christians from Iraq, Eritrea and Afghanistan and many from the UK too. 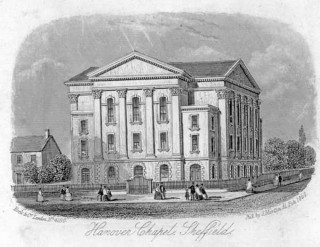 Before the present building was constructed a large church hall seating 1800 people was built on this site in 1860 to cope with the large number of people becoming Methodists in Sheffield.  So many people were becoming Christians there was no room for them in existing churches.

The original church hall was demolished and an examination of the existing walls (I work in architecture) shows that the present hall was built in the 1960s.  It is very much smaller, and can seat 90 in comfort (I put the seats out and count the congregation on a Sunday morning.)

The Methodist church in the 19th century was well known for its work among the poor.  In 1830 it began Sunday Schools – a few hours of education for children after church for one penny. Working class children could not read.  Other churches began Sunday Schools and church schools and this led to the Education Act of the 1870s and free compulsory education for children in Britain, actually as an attempt to stop churches controlling the education system.  James Keir Hardie, the founder of the Labour Party, was a Methodist lay preacher. 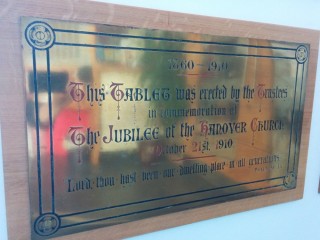 In 2008, when the building was being renovated, this old plaque was found.

There is another similar plaque showing the sixtieth anniversary in 1920. Both plaques are on the wall behind the double doors at the church entrance.

What would it have been like to have lived in Sheffield 150 years ago?  Sheffield was an industrial town with steel works, cutlery factories and houses packed close together.  Life would have been harsh.  Working hours were long.  Wages were low.  Illness and malnutrition were rife.  There were huge epidemics of illnesses like cholera and typhus (typhoid.)  Life expectancy was short.  If you lived to be 5 you would probably live to be 50.  But in the midst of it all people had a strong faith. 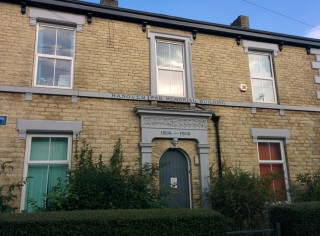 The Hanover War Memorial Building is attached to the Jesus Centre on the corner of Filey Street.  It is currently used as office space. This fine building was constructed to commemorate those who were lost during the Great War, as it was called at the time, which we call the First World War, from 1914 – 1918.  This was an extremely tragic war and the causes of it are very complicated.  Historians still argue about how it started and who was to blame.  There was considerable loss of life.  Technology was in a period of transition. Tanks, aeroplanes and rockets mixed with soldiers with rifles fighting hand to hand and cavalry mounted on horseback.

In the battlefields of France the soldiers dug trenches in which to hide and protect themselves from falling shells.  My friend’s uncle was killed at the Battle of Ypres by poison gas, as were many others. The Battle of Ypres is a well known historical event.  Many buildings and events have been dedicated to the memory of the millions of people who died in that war.