You are here: Home>Explore OUR Broomhall>Topics>Entertainment>Harry Tudor and the Temperance Hotel

Harry Tudor and the Temperance Hotel

Broomhall's past connections to the entertainment industry 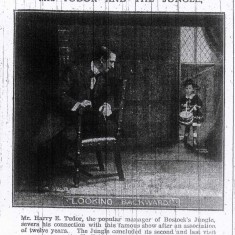 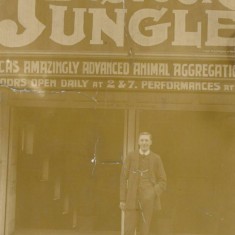 Hannah Unwin ran the famous Temperance Hotel on Victoria Street and gave lodgings to many Sheffield entertainers of the time. On the 1911 census we can see a Harry E Tudor lodging there with his wife Isobel and daughter Isla, listed as being born in America. Harry was a famous character in the national circus scene but in 1911, age 41, his profession is listed as ‘Amusement Catering’.

“Harry E. Tudor was a colorful personality in both the aviation and the show business worlds. As a show promoter, he was the manager of Frank C. Bostock’s Bostock Jungle, a wild animal show that gained its greatest fame by staging a number of legal wedding ceremonies inside a steel cage, with human brides and grooms attended by wedding parties made up of lions and tigers. From about 1908 until 1912, Tudor travelled extensively in the U.S. and in Europe with the show. When Frank Bostock died suddenly in 1912, Tudor moved into the amusement business, selling rides and devices for J.W. Zarro Co. This experience led to his next position as manager of the famous Rockaway Playland Amusement Park on Long Island, NY, then called the L.A. Thompson Amusement Park.”

Read more about Harry on the National Fairground Archive website