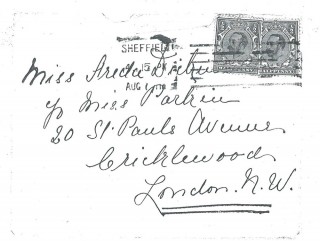 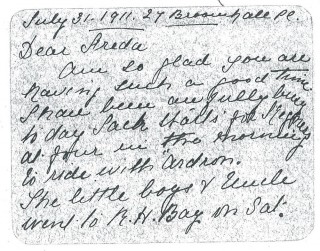 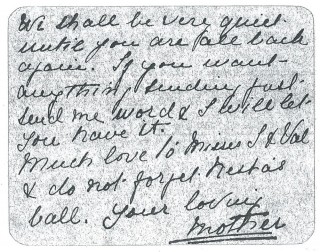 A series of letters written by Edith Annie Dickinson née Maitland) of 27 Broomhall Place, Sheffield, to her elder daughter, Winifred MaitlandDickinson(referred to as Freda in letters) during the summer of 1911…

See here for more about the Dickinson family

I am so glad you all having such a good time. I have been awfully silly to day such that’s for Geffrey’s at four in the morning to ride with Adrian. The little boys v uncle went to R.H. Bay on Sat.

We shall be very quiet until you are all back again. If you want anything sending fast send me word & I will let you have it. Much love to misses S & Val & do not forget Nestas call.

Misses S and Val: probably the people Freda was staying with in Cricklewood : Thomas Parkin, was a journalist and former Sheffield Telegraph staff. His daughters Ivy Constance and Valerie Mary were living at 20 St Paul’s Avenue (1911 census) and living in Sheffield at the time of the 1901 census. In 1901 Thomas Parkin was living at 39 Elmore Road and his profession was a journalist (assistant editor).

Read the next letter…