You are here: Home>Explore OUR Broomhall>Topics>Diaries and Letters>The Dickinson Family of Broomhall Place: Life at No. 27 ~ 15th Aug 1911 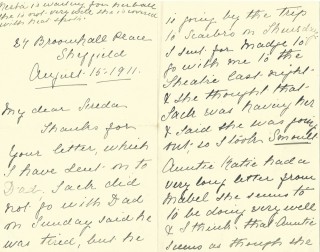 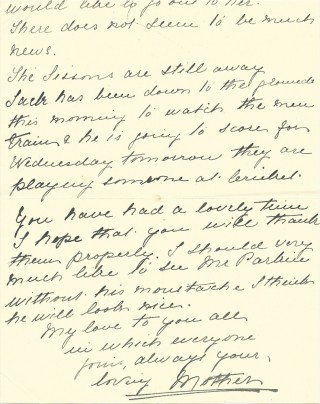 Nesta is waiting for her ball (?) she is not very well she is covered with heat spots.

Thanks for your letter, which I have sent on to Dad. Jack did not go with Dad on Sunday said he was tired, but he is going by the Trip to Scarboro on Thursday. I sent for Madge to go with me to the theatre last night & she thought that Jack was having her & said she was going out; so I took Sonoull. Auntie Katie had a very lovely letter from Mabel she seems to be doing very well & I think that Auntie seems as though she would like to go out to her. There does not seem to be much news. The Sissons are still away Jack has been down to the grounds this morning to watch the men train & he is going to score for Wednesday tomorrow they are playing tomorrow at ? You have had a lovely time, I hope that you will thank them properly. I should very much like to see Mr Parkin without his moustache. I think he will look nice.

My love to you all, in which everyone joins, always your, loving mother

Dad: Frederick Percy Dickinson, journalist and a sub-editor of the Sheffield Telegraph

The Sissons: Probably family living at 34 Broomhall Place on 1911 census

Mr Parkin: A member of the family with whom Freda was staying

See the next letter