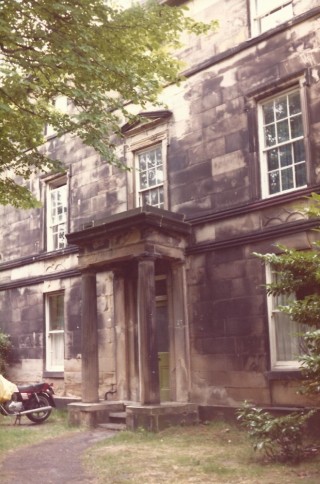 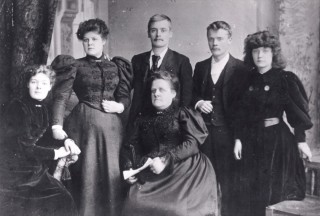 No. 27 Broomhall Place was the family home of the Dickinson family at the beginning of the 20th century. It was one of the houses in the beautiful Georgian terrace which was later demolished in the 1980s.

Judith Gaillac first got in touch with the project about her family and shared with us this picture of 27 Broomhall Place, taken in 1977.  Although she never lived in Sheffield herself, Judith visited once to see the house where her father was born and where he and he family had lived.

Her father John Dickinson was born in 1899 and lived there with his father Frederick who was a sub-editor on the Sheffield Daily Telegraph, his mother Edith, brothers, sisters and at one time also his uncle, Arthur Joshua Dickinson, who was Secretary Manager of Sheffield Wednesday football club.

Judith has donated a photograph (see photo on right) of the Maitland family which includes Judith’s grandmother, Edith Annie Dickinson (nee Maitland), with her own mother, brothers and sisters. Judith suggests that the picture would have been taken after the 15th September 1894, as her grandmother, shown second from the left, is wearing a wedding ring.

The 1911 census for the Dickinson family for 27 Broomhall Place shows the people below living there in eight rooms:

Edith Annie Dickinson- Wife, aged 42, married. It shows in 1911 that Edith had been married for 16 years. The total of children she had which were born alive were six and the total that were still living was five, so one child had died. She was born in Coventry.

Judith has also shared with us a series of letters written in 1911 by her grandmother: