You are here: Home>Explore OUR Broomhall>Topics>Diaries and Letters>The Dickinson Family of Broomhall Place: Life at No. 27 ~ 6th Sept 1911 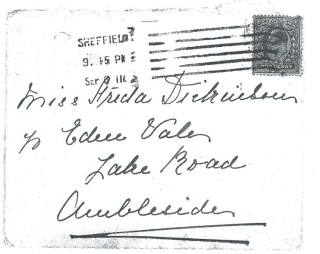 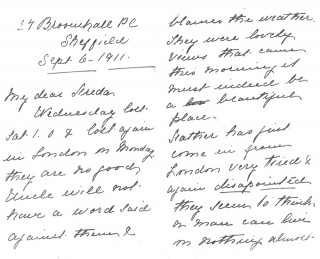 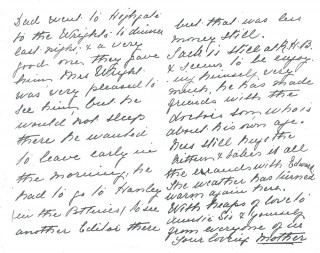 Wednesday lost Sat 1.0 & lost again in London on Monday they are no good, Uncle will not have a word said against them & blames the weather. They were lovely views that came this morning it must indeed be a beautiful place.

Father has just come in from London very tired & again disappointed they seem to think a man can live on nothing almost. Dad went to Highgate to the Wrights to dinner last night, & a very good one they gave him, Mrs Wright was very pleased to see him but he would not sleep there he wanted to leave early in the morning, he had to go to Hanley (in the Potteries) to see another Editor there but that was less money still.

Jack is still at R.H.B. & seems to be enjoying himself very much, he has made friends with the doctors son who is about his own age. Ness still keeps the kitten & takes it all the errands with Edward. The weather has turned warm again here. With heaps of love to Auntie Sis & yourself from everyone of us

Father: Frederick Percy Dickinson, journalist and a sub-editor of the Sheffield Telegraph

The Wrights: Probably the Wright family, Richard Ernest Ariel Wright, journalist, of 113 Southwood Lane, Highgate, all family members born Sheffield (1911 census). He was living with his widowed mother and two sisters at 27 Broomhall Place at the time of the 1891 census. At the time of the 1871 census he is living at 186 Hanover Street with his family. His father Josiah Wright, from Hanley, Staffs, is a printer reader and clerk. REA Wright was perhaps a former colleague of her grandfather’s and that was how he knew about the house at 27 Broomhall Place.

Auntie Sis: probably Alice Dickinson, one of the three maiden aunts of R.H.B., who appears to have taken Freda to Ambleside on her return from Cricklewood