You are here: Home>Explore OUR Broomhall>Topics>Diaries and Letters>The Dickinson Family of Broomhall Place: Life at No. 27 ~ 24th Aug 1911 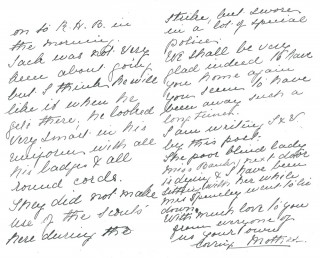 I do not think there will be any trouble about traveling on Sunday. Phyllis Wright came to Sheffield on Tuesday by a trip, but they did not allow any luggage, so be sure & send yours first. They did not engage Dad at new post it was not the sort of work he had been used to, we are not sorry, it was so far away.

Jack & Dad went to Hull this morning & intended staying there for the night & there on to R.H.B in the morning. Jack was not very keen about going but I think he will like it when he gets there; he looked very small in his uniform with all his badges & all round cords. They did not make use of the scouts’ here during the strike, but swore in a lot of special police.

We shall be very glad indeed to have you home again you seem to have been away such a long time. I am writing S & V by this post. The poor blind lady Miss Banks next door is dying & I have been sitting with her while miss Spencley went to lie down.

With much love to you from everyone of us your own Loving mother.

Phyllis Wright: probably a member of the Wright family mentioned in the next letter and possibly Phyllis Mary Ariel Wright, who was aged 23 and daughter of Richard Ernest Ariel Wright, journalist, of 113 Southwood Lane, Highgate, all family members born Sheffield (1911 census). He was living with his widowed mother and two sisters at 27 Broomhall Place at the time of the 1891 census. At the time of the 1871 census he is living at 186 Hanover Street with his family. His father Josiah Wright, from Hanley, Staffs, is a printer reader and clerk. REA Wright was perhaps a former colleague of her grandfather’s and that was how he knew about the house at 27 Broomhall Place.

Dad: Frederick Percy Dickinson, journalist and a sub-editor of the Sheffield Telegraph

S and V: Probably the Misses Parkin, Freda was staying with in Cricklewood

See the next letter