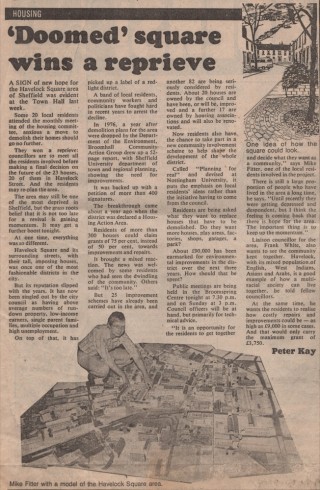 Back in 1979, local resident Mike Fitter was closely involved in the consultations about regeneration. This newspaper article describes the campaign.

A sign of new hope for the Havelock Square area of Sheffield was evident at the Town Hall last week.

Some 20 local residents attended the monthly meeting of the housing committee, anxious a move to demolish their homes should go no further.

They won a reprieve: councillors are to meet all the residents involved before making a final decision on the future of the 13 houses, 20 of them in Havelock Street.

And the residents may re-plan the area. The area may still be one of the most deprived in Sheffield, but the grass roots belief that it is not too late for a revival is gaining momentum. It may get a further boost tonight.

At one time, everything was so different.

Havelock Square and its surrounding streets, with their tall, imposing houses, was once one of the most fashionable districts in the city.

But its reputation slipped with the years. lt has now been singled out by the city council as having above average numbers of run-down property, low-income earners, single parent families, multiple occupation and high unemployment.

On top of that, it has picked up a label of a red-light district.

A band of local residents, community workers and politicians have fought hard in recent years to arrest the decline.

In 1976, a year after demolition plans for the area were dropped by the Department of the Environment, Broomhall Community Action Group drew up a 52-page report, with Sheffield University department of town and regional planning, showing the need for improvements.

It was backed up with a petition of more than 400 signatures. The breakthrough came about a year ago when the district was declared a Housing Action Area.

Residents of more than 300 houses could claim grants of 75 per cent, instead of 50 per cent, towards improvements and repairs. It brought a mixed reaction. The news was welcomed by some residents who had seen the dwindling of the community. Others said: “lt‘s too late.”

But 25 improvement schemes have already been carried out in the area, and another 82 are being seriously considered by residents. About 20 houses are owned by the council and have been, or will be, improved and a further 17 are owned by housing associations and will also be renovated.

Now residents also have the chance to take part in a new community involvement scheme to help shape the development of the whole district.

Called “Planning for real” and devised at Nottingham University, it puts the emphasis on local residents‘ ideas rather than the initiative having to come from the council.

Residents are being asked what they want to replace houses that have to be demolished. Do they want more houses, play areas, factories, shops, garages, a park?

About £90,000 has been earmarked for environmental improvements in the district over the next three years. How should that be spent? Public meetings are being held in the Broomspring Centre tonight at 7.30 p.m. and on Sunday at 3 pm. Council officers will be at hand, but primarily for technical advice.

“lt is an opportunity for the residents to get together and decide what they want as a community.” says Mike Fitter, one of the local residents involved in the project. There is still a large proportion of people who have lived in the area a Iong time, he says. “Until recently they were getting depressed and despondent. but I think the feeling is coming back that there is hope for the area. The important thing is to keep up the momentum.”

Liaison councillor for the area, Frank White, also wants to see the community kept together.

Havelock, with its mixed population of English, West Indians. Asians and Arabs, is a good example of how a multi-racial society can live together, he told fellow councillors.

At the same time, he wants the residents to realise how costly repairs and improvements could be – as high as £9,000 in some cases. And that would only carry the maximum grant of £3,150.