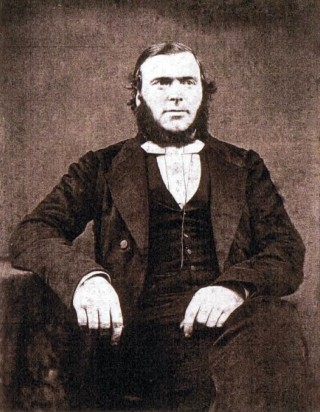 Rev. Robert Stainton lived at 95, Broomspring lane from 1865 to 1877 and was the minister of Garden street chapel in those years. The reverend strove for the poor and the outcast of Sheffield in the late 1860s & 70s and where his succour, comfort and encouragement was the kind which was of inestimable value to the ministry and the people of Sheffield. Rev. Stainton can justly be called The Primeval Philanthropist of Broomhall.

Research into his life has been a thorough revelation which left me inspired and intrigued. Time hopping to the nineteenth century showcased the familiar human crab mentality behaviour that the reverend experienced in his pastoral and political life. His prominence in politics and the trade outrages gave rise to his opponents going negative towards him on the personal and professional front.

Rev. Stainton’ s (believed to be a native from Hawick Scotland and had resided in Ireland for sometime)—a land of religion. The prevailing theology under the influence of which he was brought up was Calvinistic, but as a young man he came under the influence of what was called “The new light” taught by Dr. Morrison and others. He went to hear out of curiosity Mr. (afterwards Dr.) Rutherford, and the impression made on him induced him to see Dr Kirk, a friend and co-worker with Dr. Morrison, and under whose influence he obtained a firm grasp of the truth which he never relaxed. His father, however, was burdened in his soul when he found that he had embraced the Gospel in an Armenian phase, and told him he must either give up his new faith or leave his home. Having to choose, therefore, between his father and Christ, he bade his father farewell, and went out alone into the world.

He came to England, and in process of time was found at Liverpool, working with Mr. Ratcliffe, a barrister, who was of like spirit. When working in that city they went together to preach in the streets of Chester during the races, and were taken into custody for obstructing the streets. Afterwards he went to the Lake District, preaching constantly, and was opposed because he preached teetotalism. He, however, hired a barn, and large numbers were attracted to his preaching, a chapel afterwards being erected. Thence he was called to Huddersfield, where he laboured for five years, preaching earnestly in the open-air and at the street corners, and although he did not fill George Street Chapel, doing a great work that was still memorable.

In 1864, the Rev. R. Stainton, then pastor of George street Chapel, Huddersfield, came to Sheffield in January 1865 to give a temperance lecture, and as his character as an evangelist had preceded him, he was invited to hold a series of revival services in the almost deserted chapel at Garden street chapel which was at that time in a very feeble condition, the congregation consisting only of 40-50 members. He accepted the invitation, and the services were held for a fortnight, being well attended. Impressions were made upon the congregation which led to personal inquiry, and ended in thorough conversions. It was felt by those who had charge of the place that if the services of Mr. Stainton could be secured the success of the cause would be attained. The Rev. J. Calvert, the Rev. J. P. Gledstone, and other friends guaranteed a certain stipend for the first two years, and an earnest invitation was given to the rev. gentlemen, who at some sacrifice accepted it. He commenced his labours in Garden Street Chapel on January 8th, 1865, preaching to a congregation numbering thirty people.

On the 24th February, a church was formed, consisting of thirty-three members, most of whom were volunteers from other churches, some of them sacrificing position and influence in order to help in raising a cause which had been looked upon as dead. It was a bitterly cold day, and as the chapel was unprovided with heating apparatus, the experience of that day kept some away until warmer weather came.

Mr Stainton, however, soon showed that he was the right man in the right place, for we find that in the ten months following the formation for the church, 102 members had been admitted, many of whom had never been associated with God’s people, and a goodly number of them out of the immediate neighbourhood. At the end of thirteen months it was found that the accommodation in the old chapel was insufficient, and steps were taken to build the present structure In 1867, a more commodious chapel, which, with the schools annexed, cost over £3000. In the raising of this large sum, Mr. Stainton did his full share, but whilst all were engaged on the new building affairs, the spiritual part was not neglected, for during the second year 166 members and in the third year 131 were added to the church roll. The churches at this time were agitated by the question, “How to reach the masses.” On this question men had thought and written, but Mr. Stainton, who at first was associated with the Rev. H. Tarrant, practically solved the problem by going to the people who would not come to our churches and chapels.

For about nine years during the winter months he had an afternoon service in the Theatre Royal, and it was no unusual thing to find that many could not obtain admission. On this work the blessing of God was plainly visible, for it brought to Garden Street Chapel such crowds that often long before the service commenced every seat was filled, and to those vast gatherings Mr. Stainton told the old old story, with such wonderful effect, that there were added to the church in the fourth year 108; fifth year, 114; sixth year, 120; seventh year, 99; eighth year 84; ninth year, 79; tenth year, 78; making a total in ten years of 1081, or, as it has been said, a soul for every sermon. In 1875 Messrs. Moody and Sankey, the American evangelists, came to Sheffield, and Mr. Stainton heartily entered into the work. The result of that visit was that the town was moved from centre to circumference. It might aptly be said that this was Sheffield’s Pentecostal day. At one service during the year 83 were admitted to membership, and for the whole year the admissions were 216. In the 12th year 79 members were added to the church roll.

In the report of this year it is said that the calls from outside places took the pastor often away from Sheffield, but that he believed in accepting these calls he was doing what God wished him to do, and the people at Garden Street fully endorsed that opinion. When it is considered that there was a church of over 900 members, some of whom were continually sick, week night meetings, Sunday services, lectures in the Theatre or the Albert Hall, and temperance addresses in the week, it seems a wonder how all this could be accomplished.

Mr. Stainton was a welcome visitor in every home where he was known. Hundreds of homes were made bright by his actions and words. The poor had in him a friend in need, and often has he acted as a physician to the body whilst he has been pointing the sufferer to the great Physician of the soul. He hated tyranny in either classes or masses, and was as ready to denounce the sins of the peasant as the peer.