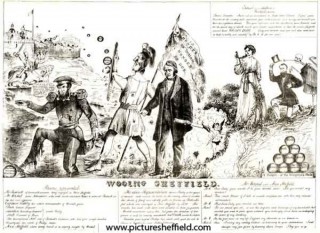 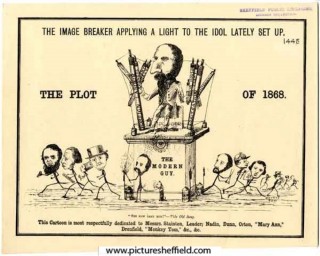 Rev. R. Stainton’s personal intent always had been to look out for the working labour. He expressed views publicly on the Sheffield trade union outrage that took place in the nineteenth century. His objective was directed at resolving this issue which affected the working people at a professional level.

He was best at expressing his views through lectures and he tried to reach an amicable settlement between the two parties i.e. the capital and labour.

Shown below is the article outlining his views on the actions of the Trade Unions:

“Last evening a lecture was given by the Rev. R. Stainton, in the Temperance Hall, Sheffield, on “Trades Unions Meetings and the Public Press, with cogitations on the recent Resurrection  and Night Adventures of May Ann. The chair was occupied by Mr. Langley. There was a very large attendance. Mr. Stainton commenced his address by remarking that in consequence of what Mr. Roebuck had said on Monday night it was his purpose to take a wider view of the subject than he originally intended. In his opinion there was never a in our country’s history when the question of capital and labour- or master and servant- was of such vital importance. (Hear-hear) They had heard one side of the question and he would try that night to give them the other if possible. (Cheers.) The causes of “unrest” and anxiety to arrive at an amicable settlement of the question was many, not the least of which were an improved education among the artisan class and the influence of well-conducted penny press. (Hear, Hear) By these means the working men were able to understand  and appreciate the law of supply and demand, therefore it was impossible to treat them now as heretofore. (Hear, hear) He maintained that the time had come when the upper ten thousand or the middle class could pass things as they used to do. (Hear, hear) This intelligence on the part of the artisan was a source of anxiety to the masters; but he contended that a kind employer would gain the affection of his servants, and in the support of this statement he instanced the case of two large firms at Halifax and Nottingham where on no occasion was there disturbance or misunderstanding. Referring to what Mr. Roebuck said about the risk which capitalists run, Mr. Stainton said he felt much grieved that nothing was said about the risk of the working men. (Cheers.) Had they no risk from the breaking of grindstones, which maimed them from life-(cheers)- and were they not open to innumerable casualties? This was perfectly clear, consequently it was idle to talk of the risks of the capitalists. It was often said that the trades union were established for the purpose of defiance; but they might just as well say that England’s armaments were kept up for the purpose of defying other nations. Everybody knew that this was not so; it was simply for defence. Then what was right in a nation could not be wrong in a citizen.  (Cheers.) Lord Derby had said that he was not opponent of trade unions confined to their legitimate objects; and that they were useful and salutary methods of obtaining the rights of the labouring classes. Why? Then, seek to destroy them? (Hear, hear.) Passing onto the question of strikes, he said there was much to be said for and against them. (Hear, hear.) HE took the position that they were right, but notwithstanding this they were inconvenient, and ti would be far better if they did not occur. (Hear, hear.) A man had a perfect right to take his labour to the best market, but at the same time he had no right to coerce others. (Hear, hear.) Mr. Roebuck had said something about such persons making themselves liable to be indicted for conspirancy-(laughter)-but this was at variance with the utterance of Lord Derby at the Ministerial banquet held at Manchester in October last. His lordship said “ Forty-three years ago I was the member of the committee of the House of Commons which first recommended and succeeded in carrying the abolition of these laws which made it illegal for working men to combine together to agree not to work under a certain amount of wages.” From this it appeared there had been such a law, but according to the premier it was abolished forty-three years ago. The question then resolved into this: twenty men if they feel they have a grievance have a right to strike, but they have no right to compel the twenty-first against his will to go with them. (Hear, hear.)  If strikes were to take place the must be purely voluntary. (Hear, hear.) In alluding to the causes  which lead to strikes, the lecturer remarked that not the least was the arbitrary conduct on the part of managers, who, in many instances, require “sweets” or a bribe otherwise they vented their spleen on the working men. But there were hundreds of men who would sacrifice every interest rather than lose their independence. (Cheers.) In his opinion there would be fewer disputes between master and servant if the managers had not supreme power, and if the complaints could be carried to the fountain head with the intervention of a third party, who oftentimes misrepresented the facts. (Great cheering.) Glancing at the exasperation manifested towards Mr. Roebuck on Monday night, Mr. Stainton maintained that this exhibition of feeling would not have been manifested had he given the other side also-(cheers)- and he was never more surprised in his life than when the hon. member concluded his lecture without any reference to it. In conclusion, Mr. Stainton briefly alluded to the resuscitation of “Mary Ann”, and the right of the press to be present at the meetings of trades unions. He strongly condemned the former, and expressed a hope that rattening would cease from the present time. (Hear, Hear.) The press he said had not the right to enter the private meetings  connected with trades unions. (Cheers.) It was true that when a society laid themselves open, as some had done, a good deal might be said in favour of publicity, but as a right the press had no business to demand admittance. (Cheers.)

On the proposition of Mr. Dronfield, seconded by Mr. Austin, it was resolved, “That this meeting tenders its sincere and hearty thanks to the Rev. R. Stainton, not only for his address this evening but also for the manliness he displayed in expressing his opinions on trades unions and the Commission of  Inquiry, as well as for his exertions in  promoting any movement either for elevating or ameliorating the condition of the working classes.”