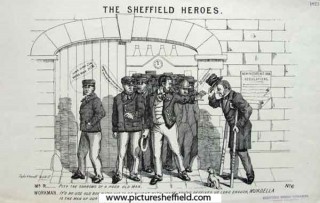 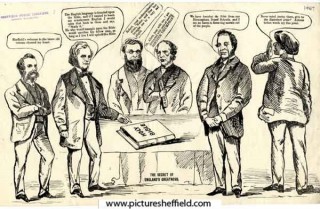 “…For his part he was not conscious of entertaining any bitter feeling towards him. He was conscious that he could not look upon a man who had committed such deeds as William Broadhead had in the same light and with the same feelings as he could upon a man who had not done such deeds. Therefore he thought that the remark about “bitter feeling” was altogether out of place. Having made these preliminary observations, to some extent explanations, he would read the resolution which he was anxious to have passed at that meeting. The plan he adopted at a previous meeting he should adopt then — have no chairman, and no mover or seconder to his resolution. All he was anxious for was to elicit an expression of feeling, by a show of hands, respecting the sentiments contained in his resolution, which was as follows : —

“That the recent speech of William Broadhead in the Pavilion Music Hall, containing sentiments inimical to the best interests of working men in general, and an implied charge of the most revolting kind against the Sheffield working men in particular, it is a duty which they owe to themselves, to the town in which they live, and the country at large, to disclaim in the strongest manner any connection with him as a leader, or any sympathy with, or participation in the crimes the said charge implies.”

As the meeting would perceive, the resolution started out with the sentiment that the speech of William Broadhead was inimical to, or subversive of, the best interests of the working men of Sheffield. Now, they were all aware that William Broadhead was looked upon by the country at large as a representative man, although he might not in reality occupy that position now. That being the case, what he said and did was to some extent watched by the public press and criticised by public opinion. Believing him thus to be a representative man, the good and the evil which might be supposed to accrue from opinions enunciated from the position held by a representative man fell upon the whole body of those whom he was supposed to represent. They were aware that in the speech made by Broadhead in the Pavilion Music Hall he had stated that his deeds had been done in the interests of the working men of Sheffield. (A Voice: ” So they were,” and interruption.) There were interests at stake in the question of deeper interest and importance than they seemed to be aware, and he wished them to understand that all that would be said to them that evening would be for the best interests of working men especially, and all men in general. (Hisses, and cries of “Shut up.”) He was sure that such acts as Broadhead had committed were not for the good of working men, and he felt certain that in proportion as working men discountenanced such acts, the more good would they do to themselves, the more advance their creditable reputation, and the more advance their material, moral, and spiritual welfare. (Interruption.) That being the case, he believed that Broadhead had most seriously injured and most emphatically damaged the best interests of the working men, not only in this town, but in the towns of England at large. (Uproar.) Believing this, he wished to call their attention to an implied charge contained in the speech of Broadhead at the Music Hall, where he had distinctly said — for he paused and said he wished to be distinctly under- stood—that he did not think himself worse than the average. (Uproar, and a Voice, “Is the Bible job at a discount?”) He had clearly boasted that he was no worse than the general average of men; and he (Mr. Stainton) asked them what that boast implied. He should like to know whether the people of Sheffield would submit to have a statement like this endeavoured to be brought home to them. (Up- roar, and a Voice: “We will not allow it to be implied.”) There were nearly 50,000 working men in Sheffield, and were they to understand that all these 50,000 persons were no better, if they were no worse, than the perpetrator of such crimes as Broadhead had confessed to? (” No.”) This was what the implied charge really meant, and he maintained that it was their bounden duty, as honourable working men, not only to themselves and the town, but to the country, to repudiate the charge — (hear, hear) — to show that there was no truth in it, and that it was a slander of the most grave and insulting character. (Hear hear, and a Voice: “He did not say so.”) He must inform that speaker that Broadhead did say what had been imputed to him, and in proof he would read the words from the newspaper — (cheers) — “he wished it to be distinctly understood that he did not think he was worse than the average.” Now, he {Mr. Stainton) meant to say that a sentiment like this, uttered in a large town like Sheffield, was an insult — a gross insult — to such a large and honourable constituency as this. (Cheers and uproar.) He could tell them that he for one was not the man to sit down with such an imputation — (cheers) — and he would tell them more than this, that it would take a great amount both of groans and other similar demonstrations to put him down, and to prevent him discharging what he considered to be his duty. (Cheers and Hisses.) He trusted he had more pluck and courage about him than that came to, and what he wanted to ask them was if the implied charge made by Broadhead was true? (“No,” and cheers and hisses.) “