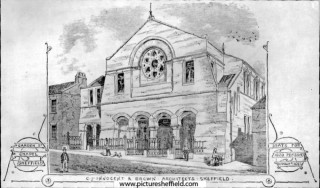 After his relocation to Sheffield, Reverend Robert Stainton was appointed as the new minister in Garden street chapel. His tireless preachings and missions to the poor made him the natural choice for the designated place of worship.

This appointment created quite a positive stir in Sheffield and was covered by the Sheffield Independent on 04 January, 1865. The Garden Street Chapel now stands as the Croft House Settlement which opened in 1902.

Last evening a meeting was held in Garden street chapel to welcome the Rev. Robert Stainton, late of Huddersfield, as the minister of this place of worship. There was a numerous attendance, and after tea the chair was taken by the Rev. David Loxton, and the Rev. Henry Quick offered prayer…The CHAIRMAN expressed his pleasure in seeing so large and interested a meeting, as the representative  of all the Congregational churches in town, and evincing the deep interest felt by them in this undertaking. To him it seemed to be one of the most Christian movements made by the Congregational body since he came to the town. Christianity was specially and gloriously distinguished by its mission to the poor, and the inspired evangelists make emphatic note of this of trait in their Master’s preaching. It was this which excited the most intense disgust in the minds of His enemies. This effort to make Garden street chapel a centre of holy influence was one which augured well for the future of our churches, since the more unselfish churches the more confidently they might expect the blessing of God. He hoped they would all feel that the work here was not Mr. Stainton’s merely, but their own- one to which they would all contribute the aid of their sympathy and prayers. In conclusion Mr. Loxton expressed a warm affection towards the new minister, and a strong confidence in his success….

The Rev. J.P. Gledstone read a brief but lucid and admirable report of the steps which had led to this inauguration meeting. The committee of the Associated churches had given their earnest attention to the position of the chapel-how it might be redeemed from its financial embarrassments, and how a suitable minister may be provided. After Mr. Stainton’s two weeks’ labour in August last, they had no hesitation in fixing upon him as a proper man, provided he could be secured, and with that prospect before them they received a most liberal response from the friends who had advanced money upon the premises. Mr. Chestermen cancelled a debt of £25, Mr. Tucker a like sum, and Mr. Hoole the major part of a still larger sum; and £200 having been promised for three years, the committee had felt themselves justified in inviting Mr. Stainton, and he although having in hand an invitation to a church in Manchester, which would gladly have secured him, and able to offer a high stipend, complied with it. The province of the committee had been to provide an adequate stipend and every facility for the conducting of religious services in the chapel, but Mr. Stainton would be perfectly independent to carry on the work in his own way without any interference from anybody. They had so much and such entire and such entire confidence in his wisdom and pity and ministerial skill that they had nothing to say to him but to bid him God speed, and express their warm fraternal sympathy in his work…

The Rev. R. Stainton, at the request of the chairman, entered into details of his religious belief as due to his brethren who had so affectionately and promptly given him the hand of fellowship, and as constituting the basis of his future ministry. After these theological averments, he spoke of his future purposes and hopes. He had some experience in originating churches and building churches. One of these he began with 15 members, and in 14 months he had seen them multiplied into 100. He entered upon this new sphere with sanguine hopes because he looked to God as having brought him here, and believed it was his work that he was undertaking. Relying on Divine help, on the faithful promise already given, and on the co-operation of those who might gather round him, he believed many souls would be saved, over which angels would rejoice and God be glorified…REV. BREVIN GRANT, regretting his inability to remain longer, expressed his warm sympathy with Mr. Stainton and his earnest desire for his abundant success. He rejoiced at the prosperous issue of the united churches’ effort, and hoped that that effort would still be continued in prayer and practical support of the new cause. In the testimony of the feeling of his own church, he said that one of his members had cancelled a debt of £35, and in addition would give £25 a year, and another would give a similar amount. His best wishes were for Mr. Stainton’s prosperity…THE REV. C. C. TYTE, classical tutor of Rotherham College, now offered a dedicatory prayer, invoking the Divine blessing on the person and work of the new minister…The Rev. JOHN CALVERT spoke briefly as to the personal affection he bore to Mr. Stainton as a man of God possessing some uncommon qualifications for the work. He believed Mr. Stainton’s short visit and labours had been greatly blessed to others than those for whose sake they had been specially undertaken. He thought that the secretary of the committee deserved great praise for his persistent and self-denying labours, of which this meeting was the triumphant culmination; also, that the committee and the subscribers were entitled to gratitude for the part they had taken, and in which they had done nobly…Mr. ARMITAGE, deacon of George street Chapel, Huddersfield, bore testimony, amidst much emotion which he could with difficulty repress, to the indefatigable labours and great success of Mr. Stainton while pastor. In one or two outstations, notorious for its barrenness of spiritual fruit, notwithstanding the labours of other Christian bodies, Mr. Stainton had gathered many souls; and these, together with others in the town, the fruit of his ministry, deeply felt their loss in his removal. While giving him up to Sheffield, he earnestly appealed for prayer from Sheffield, that the Lord might fill up his vacancy so painfully made…the Rev. H. TARRANT avowed his unfeigned and great delight in the addition of Mr. Stainton to the staff of Congregational ministers in Sheffield, and confidently anticipated pleasure in his society and abundant results from his labours, -Mr. Stainton will commence his labours next Sunday, and judging from the eagerness expressed by those who heard him in August, there will be large audiences.

Click the links below to read more Stainton related articles:

Preface of the Making of Sheffield ~ by Local Author James H. Stainton