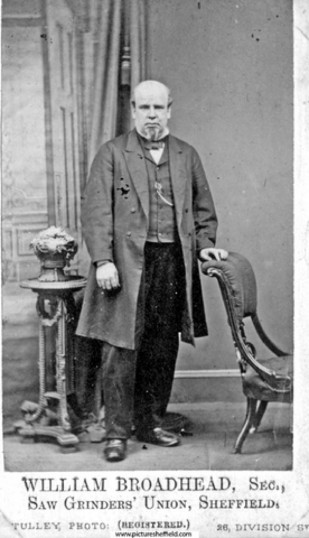 Rev. R. Stainton’s involvement with the trade union outrages got him in conflict with Mr. William Broadhead- a British trade unionist and saw grinder.

Born in Whirlow, Sheffield, Broadhead worked as a saw grinder from childhood, later becoming the landlord of a public house in Owlerton. He used his income from this business to support saw grinders who found themselves in difficulties, and as a result, was elected General Secretary of the Saw Grinders Union in 1848.

Under his leadership, the union grew in power, raising large sums of money for their members, and disrupting the work of non-union members. This disruption took several forms, including damaging equipment, sending threatening letters, and even bombings and shootings.

Broadhead never became personally involved in this intimidation, and was able to occupy a prominent position in trade union politics, being elected to an office in the first Sheffield Association of Organised Trades in 1858, and then made Treasurer of the United Kingdom Alliance of Organised Trades in 1866. As the union’s struggle against unorganised labour came to national attention, its actions became known as the “Sheffield Outrages”.

In November 1866, the Sheffield Association and the London Trades Council asked Parliament to investigate. Most union members, including Broadhead, were given certificates of immunity, so although Broadhead ultimately confessed to ordering a murder and various other crimes to be committed, he was not convicted of any. He remained with the union, but was refused his publican’s license.

“On Saturday afternoon the Rev. Stainton delivered an address in Paradise square, the object of which was to refer to William Broadhead’s recent speech, and to pass a resolution condemnatory of the speech and his proceedings. The attendance of working men was asked for in the advertisement calling the meeting, and Mr. Stainton’s audience consisted almost entirely of that class. The attendance was not large; probably there were not more at any time that 300 or 400 persons present. Almost as soon as the rev. gentlemen commenced his address it soon became evident that there were a number of friends of Broadhead present, for the groaned, and they hissed, and shouted, and towards the close of the address amused themselves by singing the chorus of a popular Music Hall song, known as “Rolling home in the morning, boys.” Not content with this they indulged in the very rough play of pushing each other about, and at length they created so much disturbance that Mr. Stainton had to bring his address to a somewhat speedy conclusion. A large majority of the meeting was in favour of Mr. Stainton being quietly heard, and they frequently answered the groans and hisses of the unruly ones by several hearty cheers.

The Rev. GENTLEMEN commenced his address by saying he could assure the meeting that he did not occupy that position from mere pleasure or choice, but from what he conceived to be, and felt to be, a stern duty both towards the honourable working men of the town and to himself. He felt, from the part he had taken in this matter, that he was to some extent involved in it, and therefore it was that he appeared before him in connection with what really was an unpleasant subject. He felt that few words of explanation before he entered upon the few remarks he intended to make. The meeting would very much mistake and misunderstand him if they thought he was in any way an enemy to the repentance or the or the reformation of Wm. Broadhead if sought in what was the really proper and legitimate way. He should have been exceedingly glad if he could have come to the conclusion that his reformation was well grounded and well proven. It was his bounden duty, as well his high honour and privilege, to seek for and believe in the reformation of every fallen man, however deeply that man may have fallen. It was also his privilege to believe that there was none too deeply fallen to be reformed or to be raised. That was the reason he took up the position he did in connection with this most disagreeable subject at the time of the sitting of the Commission. He was perfectly aware that Wm. Broadhead had commenced to work. He did not require to be informed about that. He was only too glad to know that he had put his hands to manual labour, as it was one of the best possible proofs that he was bent upon personal reformation. Whether he was believed or not he could assure the meeting that it was with deep sorrow that he had heard that Broadhead was not allowed to work. The question however, really was, could a man who had received indemnification from the punishment due to the crimes he had committed claim the same privilege of working for his daily bread as honourable upright citizens? (Hear, Hear) It was quite clear that there was a misunderstanding as the way in which Broadhead viewed his certificate if indemnity. The indemnification was never designed to give to a criminal all the social privileges belonging to a right and good citizen as well as to indemnify him from the punishment which his crimes had deserved. Before an indemnified criminal could again be permitted to enjoy the confidence of the public he must give proof that he deserved it, otherwise it could not be extended towards him. (Hear, Hear) The question was, how could Broadhead regain the confidence he has forfeited? One way was by honestly working for his daily bread, and he (Mr. Stainton should have been exceedingly glad if he had been permitted to do so. It was quite clear, however, from the speech made by William Broadhead, at the Pavilion Music Hall, the other night, that he felt that a bitter feeling existed against him in the town. It, however, appeared to him William Broadhead very much misunderstood his true position…”