You are here: Home>Explore OUR Broomhall>Topics>Journalism>The Calamitous End of Rev. H. H. Wright 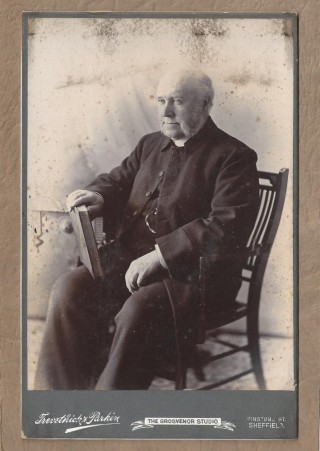 Rev. H. H. Wright the publicly recognised dignitary was one of the most popular members of the local clergy. Hence the news of his tragic death came as a great shock to the Broomhall parish society.

His mysterious and ill-fated death made headlines in various newspapers. We bring to you an article that has details of his untimely death and the inquest that was subsequently held.

The sad news was received in Sheffield yesterday that the Rev. H. H. Wright, vicar of St. Silas, Sheffield, one of the oldest, most genial, and most popular members of the local clergy, had met with a violent death at Scarbro’, where he had been staying for the benefit of his health. Mr. Wright had been suffering from a nervous affection for more than a year, and in February and March he paid brief visits to several health resorts, without gaining any substantial benefit. In July the Archbishop granted him relief from his parochial duties for six months, and since that time he has stayed with a son at Birkin, in the lake district, and in Scarbro’. A correspondent in that watering place sends us the following account of the discovery of Mr. Wright’s dead body: –whilst proceeding to rush from the rocks at the foot of the Castle Hill, Scarbro’ a shocking discovery was made by three anglers on Saturday afternoon. They had reached the point where the cliff towards above to a height of over 200 feet, and about one hundred yards beyond the point at which the workman have armed in the construction of the new marine drive, when they saw what they thought was the body of a man laid head downwards on the rocks. The anglers, included Mr. J. T. Watson, the coroner’s officer, who made an inspection of the body, which was that of an elderly clergyman, who judging from the pool of blood near the head, had been dead for some time. Mr. Watson proceeded with all haste to the police station, and together with Sergeant Heads and two constables, returned with the ambulance. The removal of the body was a most difficult task, on account of the rocks and it was over two hours before the mortuary in the town was reached. Here the body was identified as that of the Rev. H. H. Wright, who until nineteen months ago was vicar of St. Silas’s parish, Sheffield. He was 67 years of age, and had lately suffered from mental depression, brought on by the arduous parochial duties with which he had been associated for years. He left the parish for a rest, being broken down with work, and after staying for some time at Winder, he came to Scarbro’, accompanied by his wife and two sons, and stayed at 6, Belmont terrace. He was last seen by Mrs. Wright on Thursday afternoon, shortly after three o’clock, when he seemed in better health and more cheerful. It was at that time that he left home and was not seen again alive by any member of his family. As he did not return by evening Mrs. Wright became alarmed and a description of the missing gentleman was given to the police and circulated by them. In the description it was stated that Mr. Wright was suffering from mental depression. An advertisement also appeared in Saturday’s papers, but nothing was heard of the missing gentleman until the shocking discovery was made on Saturday afternoon. The advertisement which appeared as follows: “Lost, an elderly clergyman. Greyish closely-cut whiskers and beard, blue eyes, slight stoop. Information to be sent to 6, Belmont terrace, Scarbro.”

When found the body was shockingly mutilated, and everything pouted to the opinion that the deceased must have fallen from the top of the Cliff. The fall down the almost perpendicular front of the cliff had been a terrible one. His head was terribly injured, both arms were broken, and one leg. Death would no doubt be almost instantaneous. Upon the pockets of the deceased being searched an Ecclesiastics Commissioners dividend warrant for £91 was found, and a small sum in money, £1.19s. in all. His gold watch was laid where it had fallen when snapped off, and it was stopped at ten minutes past four. The other portion of the chain was attached to the waistcoat. The shocking affair caused a great sensation in Scarbro’, where the deceased was well-known to a number of people. The inquest will be held today.

Mrs Wright telegraphed on the evening of the disappearance to her son, the Rev. Walter Wright, who is a curate at Christ Church, Pitsmoor, and that gentleman proceeded to Scarbro’ by the early morning mail.

The Rev. H. H. Wright, who was 67 years of age, has been engaged in clerical work in Sheffield since 1858, in which year he was appointed curate of St. George’s parish by the then vicar, the Rev. W. Mercer. There he quickly gained the esteem of the parishioners, and inaugurated a parochial activity the benefit of which is felt to this day. After six years’ active work here he accepted the curacy of the Abbey Church, Worksop. Three months later he was offered the incumbency of St. James’ to succeed the Rev. T. Best. He accepted the position, and while fulfilling his duties there succeeded in carrying out some important reforms. For example, he induced those who held a freehold certain pews to waive their rights or privileges, and as a result the church was made available for the parishioners, and the seats in the gallery were rendered free to all corners. Mr. Wright soon infused new life into the dry bones of church life in this old city parish. Old organization were revived, and new ones created. He started the first mothers’ meeting in Sheffield commenced an evening service and established a day school. The interior of the church was restored and modernised at a cost of £400. During his inembency of his parish he became a member of the Weekly Board of the Royal Hospital, a position which he held until his death. In the year 1878 the Church Burgesses appointed Mr. Wright to the living of St. Silas in succession to the Rev. Canon C. S. Wright. Thanks to the enthusiastic cooperation of his curate, the Rev. R. G. Pyne, Mr. Wright leaves the parish full of vitality. The deceased leaves three sons, all clergymen, and one unmarried daughter. The eldest son, the Rev. C. H. L. Wright, is in India, the second son, the Rev. H. W. Wright, in rector of Birkin, and his third son has already been mentioned, Mr. Wright was a very genial man, and his smiling face was familiar to thousands of people in Sheffield.

During the absence of the deceased from the parish the Rev. G. Obison has had charge of the work in conjunction with the Rev. R. G. Pyne, and has resided at the vicarage in Broomhall Park. The body will be buried at Lenion, Nottingham.

Reference was made to the sad death of the vicar at the church yesterday morning in his sermon by the Rev. R. G. Pyne. The preacher, speaking from the text, “Heirs to eternal life.” (Timoty, 5-7), referred to the sad loss which the parish had sustained, and assured the bereaved of the deep sympathy which was felt by all. Everybody acquainted with Mr. Wright, the speaker said, would know that to him death would mean entrance to life.

We are asked to announce that a memorial service will be held at St. Silas on the day of the funeral, which, however, is not yet decided upon.