Researched and written by Roger Manktelow 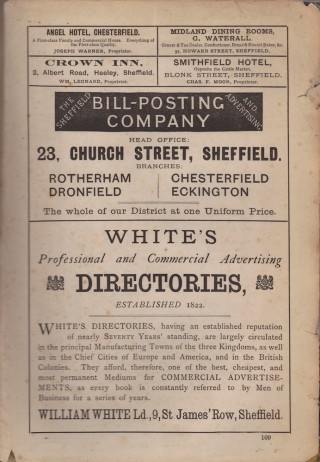 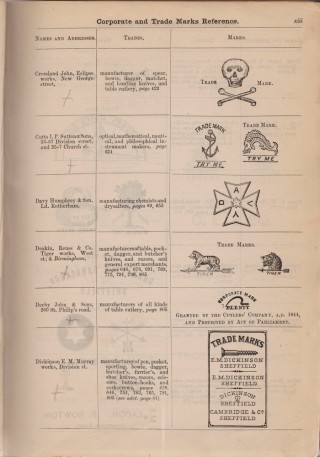 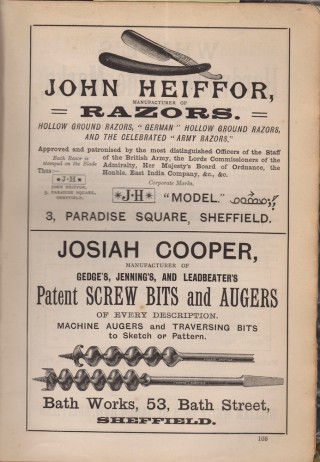 William White, editor of Whites Directories, according to the census lived on Collegiate Crescent, Broomhall in 1861. He was born in 1799 probably in Sheffield. He began his career in publishing, working under Edward Baines owner and editor of the Leeds Mercury, a paper with Liberal sentiments.

William had a shop on Fargate from where he started publishing the directories in the 1820’s when he was still quite young. Initially they covered Sheffield but eventually they covered many parts of the country from Devon to Westmoreland.

The Directories could perhaps be described as an early form of Yellow Pages some including telephone numbers for example the 1891 edition, Thomas Turton of Sheaf Works telephone number is recorded as S.T.E 164. But mainly they were limited to telegraphic addresses.

They gave street-by-street and alphabetical information about who lived where plus details of their trade or occupation plus an alphabetical list of trades and services from concrete floor layers, of which there were two in 1891, to turning fork manufacturers. Included in the information are such things as adverts and trade-marks. More interestingly they also contained…

“…an enormous amount of background information and history of each town village and hamlet, as well as of the county in general.”

The entry for Sheffield from the 1891 edition…

“Sheffield, in the days of Chaucer, was already famous for its cutlery. It is now, in addition to being the Metropolis of the cutlery trade, become the centre for the manufacture of all descriptions of iron and steel goods…”

“The neighbourhood of Sheffield is exceedingly pretty and romantic, and easy of access from the town…”

The Directories also gave considerable information about organisations, institutions and activities in the areas covered including such things as the workhouse and the relief of the poor, municipal government and administration of justice, banks, musical societies, schools, libraries and churches as well as statistical information.

Information was also organised district by district, Ecclesall Bierlow a part of Sheffield in which Broomhall falls within, is described below:

“…includes the South Western part of the Borough, lying for the most part between the Sheaf and the Porter…Earl Fitzwilliam is the lord of the manor…”

Gathering such information must have been a considerable undertaking but it is unclear how this work was carried out. Presumably it was collected door to door, whether or not permission was obtained before entries is also unclear, although there are gaps, clearly there was no such thing as data protection at that time.

William White died in September 1868 and is buried in Ecclesall All Saints. Whites Directories continued under other leadership until they were absorbed into Kelly’s Directories in 1898.

See White’s Directory of Sheffield: Broomhall Streets A to D ~ 1891