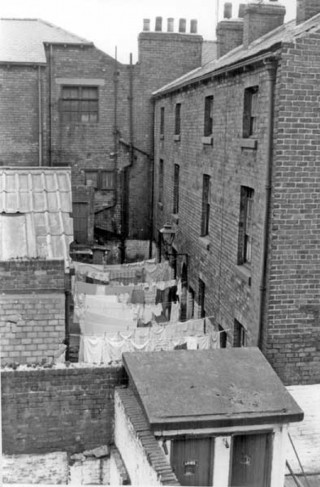 Barbara has written a piece about her memories of the Sheffield Blitz. She was only seven years old in December 1940 when the bombs targeted the area where she lived:

“I was born in 1934, so was very young at the beginning of the war.  We lived at 25/4 Hodgson Street, next to the Ecclesall Tavern, which was on the corner with Hanover Street.  I can remember feeling a sense of excitement as the adults shared the news, but this soon turned to fear as the sirens went and I was taken from my bed into the Anderson shelter.

By the time of the Blitz, I was aware of the danger and remember having to take my gas mask everywhere.  I had my own little torch as there was no street lighting, and our door was fitted with a metal strap which connected with a press button switch to turn on the light – and disconnect again as the door was opened.  This stopped any light from shining outside.  Everyone had blackout curtains and sticky tape was criss-crossed on the windows to prevent the glass from shattering into the room.

On the night of the Blitz we joined my aunt and her family in their cellar which had been reinforced, rather than go into our own shelter. I guess this was to offer encouragement and support to one another – safety in numbers?  Where possible, adjoining houses had an escape door knocked into the cellar wall in case anyone was trapped.

My dad was on ‘fire spotting’ duty at work that night – a role played by men who looked out for fires and incendiary bombs.  I was really anxious until he joined us safely in the shelter and he provided an amusing moment in the most harrowing of experiences.  He was eating his supper on an upturned wooden orange box when there was an almighty bang.  The box went up in the air with my dad on it and he came back down to earth smashing it to pieces.  Luckily, he was unhurt.  The next anxious moment was when, in the midst of all the bombing, he went across the yard into our house to take my mum’s Christmas cake out of the Yorkshire range oven.

As we went up the passage into the street after the all-clear, it was obvious what had caused the loud bang.  A bomb had exploded in the middle of the road, luckily avoiding a direct hit on property, but there was so much damage to the houses in the next yard that they had to be demolished.  Across the road were two houses, one owned by Mr Walter Sorby who ran the local corner shop, and the other belonging to his mother ‘Old’ Mrs Sorby.  Sadly her house was full ablaze as were the ones as I looked up ‘Little’ Hodgson Street towards William Street and Sunny Bank where my friend lived.  I was so worried for her.

The explosion had made a huge crater in the road and burst the water pipes.  This meant that we had to slide our way on the icy streets to Daniel’s, the butcher’s in Ecclesall Road, to fetch water in buckets. I’m sure that the electricity and gas were cut off too, but couldn’t swear to it.

There was very little in the way of toys and treats those days and I don’t know how my mum did it, but she managed somehow to get hold of gifts to make Christmas very happy for a little girl.”