You are here: Home>Explore OUR Broomhall>Topics>Art>George Cunningham: Second World War in Broomhall ~ Part 10 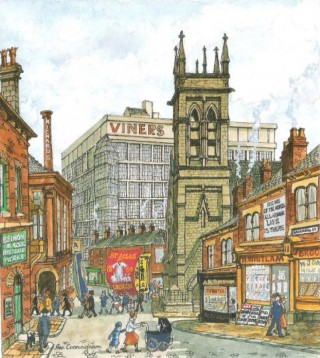 ‘Soon after this episode, squads of fire watchers were formed at Viner’s, consisting of eight men, of which I was one, probably due to me being experienced in dealing with conflagrations.’

‘The hours of duty were from seven o’clock at night until seven next morning. A command post was situated in a little-used cutlery warehouse on the second floor and was fully equipped for dealing with enemy action with a full-sized snooker table, eight bunks and a dart board.’

‘My squad, all of them older than me, was made up of: Bill Evans, who was a sixty-year-old cutlery forger; a spoon and fork stamper, Ernest ‘Mac’ Coles; Fred Naylor, the silver spinner; Harry Bagshaw, stamper; Squire Rodgers, collier; Alfie Farmer, spare lad; and Stan ‘Curly’ Watson, stamper.’

‘Alfie, whom Mother Nature hadn’t blessed with a full amount of grey matter, was nevertheless very useful for performing minor tasks in the forge. Early in the war, the clock in this department stopped, never to go again, and every so often Alfie was sent to the time house to see what the time was. Unfortunately, Alfie couldn’t tell the time and when he enquired he was told any hour, just for a laugh.’

‘To combat this, Bill Evans told him to hold his arms in the same position as those on the clock face and keep them like that until he got back to the forge. The snag with this ingenious system was that, on the return journey, some joker would waylay Alfie and keep him talking for so long that his arm clock was always slow.’

‘Stan Watson, thin to a state of emaciation, could still work long hours as a drop forger, existing on nothing more than tea and fags. He was in his late fifties, with false teeth so large they kept his lips from meeting, and high cheekbones, bossily prominent under the waxy, tightly-drawn skin.’

‘We quickly developed a well-organised routine of snooker, darts and cards, and apart from a couple of false alarms the Luftwaffe, as if aware of our thorough training and strict discipline, left us alone. As a break from the severity of this nocturnal grind, a rota was drawn up allowing two at a time half an hour to visit any nearby hostelry.’