You are here: Home>Explore OUR Broomhall>Topics>Art>George Cunningham: Second World War in Broomhall ~ Part 7 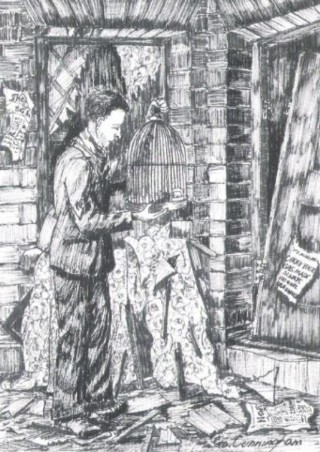 What did they find?

‘Being nearest to the door, I was first up the cellar steps and into the back yard. Although it was just turned four o’clock on a winter’s morning, the light of nearby fires and moonlight provided enough illumination for me to see the scenes of destruction. A cast-iron inspection grate cover in front of the outside lavatories had been blown up into the air from a direct hit on the sewer, thereby showering its fragrant contents liberally all over the yard and nearby houses.’

‘Pieces of newspaper, which only at the beginning of the week I had carefully cut into small squares and pierced with a nail, were plastered profusely on the walls like sodden posters. A strong stench of effluent contrasted sharply to the appetising aroma of frying bacon. ‘Ar bet that’s comin’ from Burgon’s warehouse,’ cried Mr Garlick, pointing to a lurid glow in Bridgefield Road.’

‘I stumbled over slates and broken glass to our back door, which was hanging on one hinge, and was about to go into the house when a plaintive ‘cheep’, followed by a feeble attempt to chirrup, attracted my attention.’

‘The living room window had been sucked outwards by the blast, along with the brown paper strips, the blackout blind and the long lace curtains. Entangled in this, handing upside down, was the cage containing Charlie, our canary. Carefully turning it the right way up, all I could see in the glow of fires was a tiny, soot-blackened bundle of feathers, which only yesterday were as bright yellow as a newly-minted sovereign.’

‘Dad, Mam and Bill went into the house while I untangled Charlie’s cage from the wreckage. I carried it inside. Dad had lit a candle. The water, gas and electricity had been cut off, the windows had been blown out, half the roof was missing and most of the living room ceiling was on the table, but otherwise things weren’t too bad.’

‘I took Charlie’s body out of his cage. He was so tiny; it was impossible that something so frail and delicate could survive the blast from a high-explosive bomb, never mind being sucked through a window. After all, didn’t colliers take a canary with them down the coalmine, because the wee bird was so sensitive to the first traces of gas? Carefully I wiped the soot and dirt from his feathers with a damp floor-cloth, thinking that at least I could give him a decent, clean burial, when suddenly, a little pulsing tremor trembled through his tiny frame and his bright beady eyes slowly opened, blinked once or twice, then twinkled, sharp and clear.’

‘Dad knew what to do. He filled Charlie’s pot with some water from a saucepan that Mam always kept on the hob, then put in it a couple of drops of whiskey from the bottle out of the threepence ha’penny club that he had been saving for Christmas. Charlie took a sip, then a few more, hopped up on to the top perch, cleared his throat, filled his chest with air, and there, amidst all the debris, crackle of fires and the crump of a delayed-action bomb, he trilled his heart out with one defiant melody after another.’

What could they do?

‘At five o’clock in the morning, there seemed little we could do until daylight. Although we were all dog-tired, sleep seemed out of the question. We cleared up the living room and kitchen as best as we could. The upstairs windows, strangely enough, were undamaged, although piles of soot had cascaded down the bedroom chimneys into the fireplaces. At least we could have a fire, and one was soon burning in the grate, alleviating the gloom a little. With all the fires raging round about, there was no point worrying about the blackout blinds not being in place, but it was very draughty.’