You are here: Home>Explore OUR Broomhall>Topics>Art>George Cunningham: Second World War in Broomhall ~ Part 14 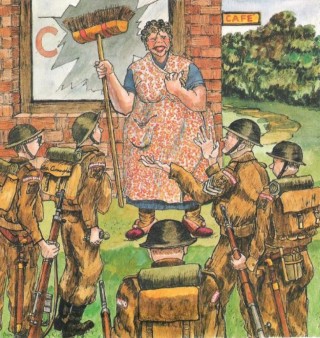 ‘We halted at the foot of a grassy slope at the top of which was a small café, about a hundred yards from us. ‘Right men, ‘Gibson whispered quietly, so that the enemy couldn’t hear. ‘Six o’ you run, bent darn, wi’ two bombs apiece. Rest on us’ll bi behind, firin’ ter cover yer.’ He continued, ‘Enemy trench’s is dat deer stooan wall, twenny yards ter left o’ café.’

‘He motioned the bomb carrier, Dicky Andrews from Moore Street, to come forward. Out of a canvas sack were produced the deadly missiles. I had the honour to be in the first wave alongside Okker, and I waited impatiently whilst Gibson instructed, ‘Dees ar dummies, dis no explosive in ’em, but thi same weight as real uns.’

‘He lined the six of us up behind the cover of some nearby bushes. ‘OK den, all y’ve got ter do is run like hell, den when y’r in range, pull ‘pin art, count five, throw grenade, lay flat forrabit, den chuck next un.’ This was more like the real thing, I thought, feeling for the first time the satisfying weight of a Mills bomb. On the word of command we set off, pounding up the slope to our objective. Battle fury surged through me, the exhilaration engendered by the charge lent wings to my heels. I curbed my impatience, trying to get as close to the enemy as I could.’

‘I thought that we were still well out of range, with about fifty yards to go, when Big Okker bellowed out a cry of defiance: ‘Tek dat, y’ lousy bleeders!’, arched his arm back, and with all his considerable strength let fly the first grenade. I threw myself flat and from under the rim of my tin hat watched the flight of the missile. At first I couldn’t see it, because not only was it travelling very quickly, it was also well off target. Instead of landing in the enemy trench, the grenade went clean through the café window.’

‘For a few seconds, after the crash of glass, there was silence; and forgetting all about the enemy I stood up, along with the rest of the squad, gaping at the damage. The window was a large one, and so was the hole in it. A woman’s face appeared in the aperture, surveyed us with an expression of astonishment, which deepened into anger, then vanished.’

‘Sergeant Major Gibson marched purposefully up to the café. He had got within a few yards of his objective when the door opened and the lady whose face I had seen through the hole in the window came out. She was well endowed. Mother Nature had been generous with her in every respect, blessing her with an ample bosom, wide hips and arms like hams. Her dress was informal: a flowery overall covered her body but revealed the curves. Carpet slippers on her feet, hair in curlers and a florid complexion, puce-like with pent-up emotion, made a vision to behold on a pleasant spring evening in the park.’

‘In one beefy paw she clutched, Britannia-like, a large sweeping brush. ‘Ar’ll give thi sorry. Ar spent ‘ours cleanin’ bloody place up, an ar wor just gunna mek missen a nice cup o’ tea, when sumbdy chucked a bleedin’ bomb through winder!’ This approach only irritated Britannia even more and the sergeant major, rashly making the mistake of closing in on her, received from the sweeping brush a mighty thrust in the chest, which sent him staggering down the incline to end up ignominiously on his backside.’