You are here: Home>Explore OUR Broomhall>Topics>Art>George Cunningham: Second World War in Broomhall ~ Part 12 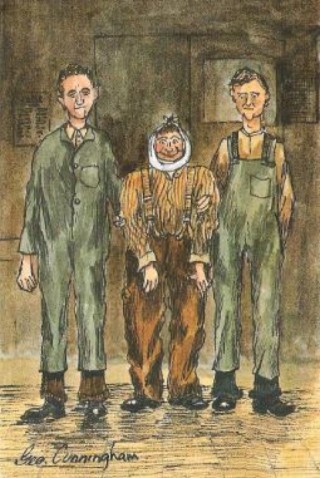 ‘A few nights later I was on duty again, and just after ten o’clock, having made a personal best break of fifteen at snooker and thinking about retiring (to bed, not from a career in snooker), the command post door burst open and in staggered the blood-stained figure of Harry Bagshaw. He was supported by Bill Evans, who himself looked as though he could do with some assistance.’

‘We gathered round the sorry pair and sat Baggy in a chair. ‘Wot’s up?’ everybody said at the same time. Bill lit a Woodbine. ‘Wi nipped across to ‘Dog and Gun and Baggy, ‘oo’d gorra bit o’ bonus this week, started knockin’ ale back as if waar wor o’er. ‘E ‘ad six pints in hafe ‘n ‘our ‘n ‘e wuda ‘ad moor if ar ‘anta dragged ‘im art.’ Pausing for a drag.’

‘Wi gorra cross rooad awreight, ‘e wor wobblin a bit an’ plattin’ ‘is legs when wi got back to ‘firm.’ He blew out a cloud of smoke and carried on. ”E wor doin’ well ’til we were cumin’ up them stooan steps. Near t’ top Baggy missed one ‘n slared darn rest on ’em on ‘is chin.’ Another drag before he continued. ‘When ar gorra ‘owd on ‘im t’ pick ‘im up, ‘e pulled hafe a bottle of whiskey art o’ ‘is pocket. It wor nearly empty. ‘E said ‘e’d gorra cowd cumin’ on an’ thowt ‘e’d ‘av a nip when ‘e went t’ gents in Gun.’

‘The wounded hero, seated in his chair beaming vacantly, looked as though he was enjoying his audience and our interest in his condition. Mac went to the sink and came back carrying a wet rag, with which he sponged some of the blood from Baggy’s face, revealing a gaping gash running all along the chin bone.’

‘Bill Evans shouted, ‘Tha looks as though tha’s got two bleedin’ gobs!’ I went to the first aid cabinet, opened it and found the entire contents consisted of an empty iodine bottle, a black eyepatch and a finger stall, which looked as though it had been used. I came back to the casualty and showed the rest of the squad what our surgical resources were. We gazed helplessly at Baggy; the bit of rag was totally inadequate to staunch the flow of blood and it looked as though he’d had it.’

‘Suddenly Mac cried out, ‘Ar know!’ and dashed out of the room. In a couple of minutes he returned, holding triumphantly aloft in each hand a sanitary towel. ‘Ar knew thi’d be sum o’ these in wimmin’s lav. Thi’ll bi just the job!’ So they were. They fitted smugly under Baggy’s chin, the loops were tied with string onto the top of his head and the flow of blood was contained.’

‘Mac, pleased with his effort, stood back in admiration and exclaimed, ‘Ar allus thowt tha wor a fanny merchant, Baggy, an’ nar tha looks like one!’ It was evident, though, that in spite of this admirable emergency dressing, Harry’s wound needed stitching, so after some deliberation Squire and myself were instructed to escort the casualty up to the Royal Hospital.’

Walking to the Royal Hospital

‘Away from the warmth of the factory, the night was cold, wet and very dark. I was on the outside, Baggy in the middle, with Squire supporting him and guiding him away from the walls. Along Bath Street we lurched, up Thomas Street and along Broomhall Street. Not a soul was about. The Bath Hotel and the Albert were closed and shuttered. We bumped into something which Squire apologised to, before he found it was a pile of sandbags protecting an air raid shelter entrance, then finally we turned into Westfield Terrace.’

‘The impressive portico of the old Mount Zion Chapel was the entrance to the hospital casualty department and I wondered what those worshippers of long ago would have thought about our motley trio as we stumbled up the steps between the huge stone pillars. We entered a large high-ceilinged, dimly-lit room, furnished with long rows of wooden benches. A marble mosaic floor and gloss-painted green walls did little to warm the flesh or cheer the soul in this sanctuary for the suffering.’

‘At the far end, a desk with a shaded lamp provided a welcome pool of light, which we made for. Behind the desk, stiffly starched in immaculate white, sat a nurse. Head down, she was busily writing in a large book. We lined up in front of the desk. She still wrote quickly onwards, a frown wrinkling her forehead, which increased as I coughed to make her aware of our presence. Closing the book, she put her cap on her fountain pen, screwed it tightly down and looked over the top of her spectacles.’

‘Dispassionately she surveyed our trio of gallant fire watchers. Squire and myself were both tall and skinny, wearing washed-out boiler suits which we had outgrown, so that the legs were inches shorter than the trousers underneath.’

‘Baggy, inbetween us, was short and fat, sporting a union flannel shirt and corduroys. Being toothless, and because the dressing was so tight, it had drawn up his bottom lip so that it almost touched his nose. It also had the effect of spreading his mouth into an idiotic grin that gave him the appearance of enjoying himself.’

‘Dried blood on his shirt front, and an aroma of stale Gilmour’s Windsor ale blended with whisky which he exuded as he swayed between us, hardly made him a rival to Ronald Colman. ‘Name and address?’ came the sharp enquiry. Baggy made a spirited attempt to reply, but could manage only a wide, imbecilic grimace and an unintelligible mumble, so, knowing where he lived, I answered for him. ‘What’s the nature of your enquiry?’ was the next question. This time Squire spoke up on Baggy’s behalf. ”E wor fire watching an’ thowt ‘e ‘eard sirens an’ wor rushin’ up steps t’ roof when e’ tripped an’ cum darn ’em on ‘is chin.’ A disbelieving sniff from the nurse was followed by: ‘Sit down and tell him to come when you hear the bell.’

‘On our way back to the firm, stumbling along in the bitter, black coldness of the night, Baggy became querulous, complaining that his new bandage ‘Weren’t as waarm as first un. That theer doctor said to me, “‘Oo purrit on? ‘E ort ter bi werkin’ at Jessop ‘ospital.”‘ Swaddled, grey-blanketed forms, from which emanated an irregular chorus of snores, groans and the occasional sigh, assured me that the fire watchers were at their usual state of alert readiness when we arrived back at our command post.’

‘In the dim, blue light, I wrote in the incident book particulars of our first casualty. Squire mashed a mug of tea, from which we all sipped gratefully, although Baggy experienced a little discomfort because his wound was stiffening up. The tea refreshed him somewhat; he revived, and exclaimed cheerfully and loudly, ‘Arve not ‘ad a bad neet. Owt’s betta dan bein’ at ‘ooam wi’ towd lass.’