You are here: Home>Explore OUR Broomhall>Topics>Art>George Cunningham: Second World War in Broomhall ~ Part 4

A Desire to Help 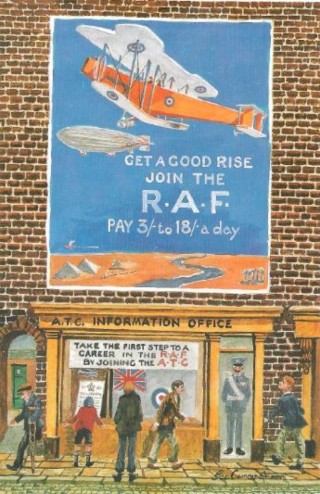 ‘Although I enjoyed reading these flowing accounts of the British Army’s triumphs on the battlefield, I rather fancied joining the Air Force, but at the age of fourteen and a bit I was too young to fly a Spitfire, so I decided to join the Air Training Corps.’

At the Recruiting Office

‘On presenting myself one Saturday afternoon at the recruiting office, I gave my age, name and address to the smart young man seated at a desk, and was told to go upstairs and wait in a room on the first floor. I stood there, with a few other hopeful aviators, waiting for something to happen. A clock on the wall ticked the seconds away and only a few nervous coughs broke the silence.’

‘Finally, the door opened and a tall distinguished-looking man, in a long white coat with a stethoscope hanging from the pocket, came in and told us to take off our clothes and leave them against the wall. We were then lined up facing each other so that the doctor could move between us to perform his examination. It didn’t take him very long: a look in the mouth, a quick check with his fingers and stethoscope on the chest, seemed all that was necessary, and then we were weighed.’

‘We lined up again and the doctor came down the ranks, tapping each lad in turn, and saying ‘A1’, until he came to me and I was told to stand in a corner of the room. I felt quite important; perhaps the ATC had got wind of my prowess as a silversmith or I had been selected for special training for some élite wing in the Royal Air Force. The officer addressed all the rest. ‘Well done lads, you’ve all passed A1. Now get dressed, you’ll be hearing from us shortly.’ They all looked delighted, especially the jockey, as he struggled to pull up his trousers over his bandy legs.’

‘As the door closed behind the last one, the doctor came over to me and said, ‘I didn’t want to tell you in front of all the others.’ I thought, this is it: Top Secret! ‘But,’ he continued, ‘I have had to fail you. Your height is six feet two inches, but your weight is only nine stones and there is evidence of some lung damage, which may not clear up, but we cannot take any chances, so I must declare you C3. I’m very sorry.’ I walked slowly over to my solitary pile of clothes. My dreams of being clad in smart RAF blue shattered as I climbed into my workaday melton trousers and pulled the braces over my shoulders – a distinguished career as a fighter ace finished before I had a chance to get off the ground.’