You are here: Home>Explore OUR Broomhall>Topics>Art>George Cunningham: Second World War in Broomhall ~ Part 16 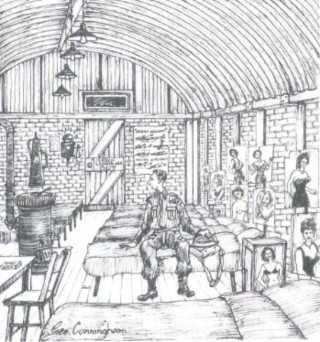 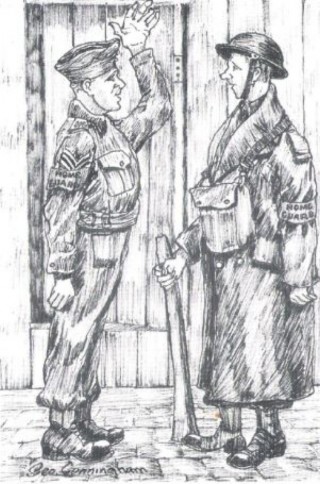 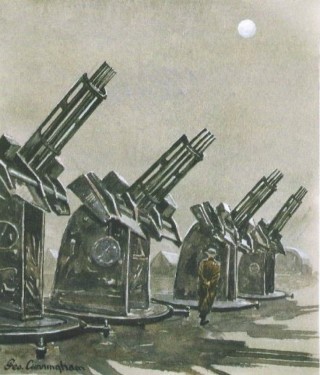 ‘Nineteen Forty-Four. I was twenty, the war had been raging for five years and, soon after my birthday, I came home from work to find a long buff envelope with the letters ‘O.H.M.S.’ embossed on it, addressed to me. Mam’s face was drawn with worry. My brother had been wounded in the fierce fighting in Italy and, although he had recovered and was back in the line, like many people at home the sight of that envelope nearly always meant bad news, although not so much as the dreaded telegram.’

‘The thin sheet of paper took some getting out of the envelope without tearing. As I read the closely-typewritten orders, I didn’t know whether to feel relieved or disappointed. It stated in a few terse sentences that George Cunningham was to report at 7.00 hours, September 28, 101 Battery rocket projector site at Shirecliffe.’

‘A sense of duty and perhaps the fear of being fined impelled me to put on my uniform and kit and set off for Shirecliffe. Although I had slept away from home many nights on fire watching duties, this was somehow different. I had mixed feelings of apprehension as I entered the gates of the gun site and reported at the guard house and was directed to ‘A’ Battery. I marched along the bleak hillside until I came to the first line of rocket projectors. I walked down the line and then found my way to a Nissen hut which bore the emblem ‘No. 1 “A” Battery’ on the door. I sat on the edge of a bunk and laid down my gas mask and steel helmet.’

‘The time passed slowly. After about an hour of checking my watch and listening in vain for a footstep passing the door, suddenly a bell rang, startlingly loud, amplified by the steel walls of the Nissen. I jumped to my feet. The bell went on ringing as I ran round the hut trying to trace the source. In a blinding flash of the obvious, I made for a telephone on the far wall.’

‘Lifting the receiver, I muttered ‘Hello?’ A voice that nearly shattered my eardrums shouted, ‘ “A” Battery, get me Lieutenant Shaw.’ ‘Sorry,’ I replied, regaining my military composure, ‘I’m afraid he’s not here.’ Immediately came another request: ‘Put Sergeant Smelter on then.’ Again I had to apologise for his absence, to be met by a demand for Bombardier Bowker. Once more I replied in the negative.’

‘The voice at the other end of the line enquired exasperatedly, ”O is theer then?’ I answered meekly, ‘Me.’ ”Oo the bloody ‘ell’s me?’ shouted the irate voice. ‘Gunner Cunningham,’ I answered. A short silence followed before the dialogue continued. ‘Ar many mooar on yer?’ When I replied tersely in my best military matter, ‘Nobdy,’ the phone at the other end was plonked down and I was left staring blankly at the hushed receiver.‘

‘However, I hadn’t long to ponder whose voice had been speaking at the other end of the line. A rapid clatter of boots on the concrete path outside the hit culminated when the door was thrown open and the burly figure of a sergeant major framed the aperture. He gazed at me then glared around the otherwise unoccupied hut. ‘Weer is everybody?’ he demanded. I jumped to my attention. ‘I don’t know, I’ve been here an hour and nobody’s come in.’ Suddenly, the SM’s expression softened into the semblance of a smile. ‘Ar know wot it is. A couple o’ days ago it were announced that it wor voluntary to attend, an’ this is wot’s ‘appened. There’s ony thee turned up arta ‘ole battery.’

‘The inside of the big wooden NAAFI hut was bright and cheerful behind the blackout curtains and a pint of beer raised my spirits somewhat.  I sat down in a corner and looked around. Apart from the girls behind the bar, the only others were three sergeants and a small grey-haired old chap sitting on his own at a table near to mine.’

‘There they were, gleaming in the moonlight, eight of them capable of firing sixteen high-explosive shells, and I alone was in sole charge of them. I walked round and round my battery with hands clasped behind my back in typical officer style, savouring every moment of my single-handed defence of Sheffield, until Nature called and I retreated to the latrines.’