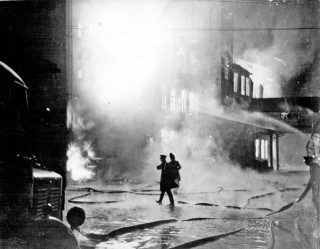 Joyce was another child who endured the Sheffield Blitz whilst she lived with her family on Clarke Street. Her father was a fireman, so as everyone was escaping the destruction and fires from bombs, he was heading towards them. She remembers overhearing him telling his story about what happened when he was fighting the German fires to other members of her family. Joyce remembers hearing the emotion in her father’s voice and seeing it in his face when he later recounted the story to her.

Her father told her that all the firemen he worked with during the war, especially on the nights of The Blitz, were extremely scared; everyone was down below the ground and they were above it. The firemen would swear as they worked to release the panic and anxiety they felt.

Her father recalled a woman from the Salvation Army in a ‘Tea Van’ arriving at the scene where he was fighting a fire. She had a cardboard tray full of cups of tea that she handed out to him and the other firemen.

Her father had to dig out bodies from the rubble of buildings which had been hit, including the site of the Marples Hotel, which suffered the most casualties from one building in the Sheffield Blitz. He was also called to help at the site of Atkinsons department store which also received a direct hit from a German bomb. Joyce remembers her father giving her a teddy he had found amongst the rubble when he returned home.

Her father also told her that he had a found an embroidered blanket when searching for survivors amongst bricks and debris and had wrapped someone in it. The other firemen found many other trinkets and took them home to their families; make up was shoved down boots and given to their wives.

Joyce also remembered that at some point during the war her father went to help at the site of a house on Clarke Street that had been bombed. She said that he had got trapped by rubble and his other colleagues had had to rescue him with a cable from a second storey window.

Her father lived to be 96 years old and there was a fireman’s display at his funeral.