You are here: Home>Explore OUR Broomhall>Topics>Art>George Cunningham: Second World War in Broomhall ~ Part 13 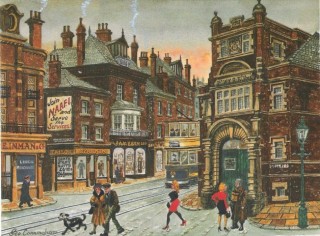 Second World War Parts 13- 16 showcase some of the stories about George’s War Time Service however, it was much different from the lives of his friends as he states below:

‘In spite of the company of my workmates and the comradeship of the Home Guard, my social life was pretty dull. Bill was called up to serve in the Lincolnshire Regiment, Norman Blackwell worked all hours, and I had heard that Vinny had joined the RAF and was training as an air gunner.’

‘The year was 1942. I was seventeen and had been declared exempt from military service because I was in a reserved occupation. In any case, I don’t think that I would have passed a medical. The days spent crouched over a bench and the long, fire-watching nights, of which I often did two a week for chaps who didn’t want to spend a night away from home, had done little to improve my physical condition.’

‘I received a missive from the War Office calling me to serve my King and Country in the Home Guard. I duly reported, as ordered, and enrolled at Edmund Road drill hall, where I and several more soldiers of fortune were issued with Khaki battledress, leather gaiters, a greatcoat, tin hat, military gas mask and a pair of ammunition boots, and told to attend parade next evening. This I did and we were shuffled into ranks by ex-regular army retired Sergeant Major Gibson.’

‘He was tall and stiff-backed, close-cropped and dapper, with two rows of ribbons on his chest. Up and down the straggly lines he slowly marched. I was a teenager, over six feet tall; the man next to me looked to be about fifty and was about five feet four, and as nearly all of us were factory hands, pallid complexions and rounded shoulders were much in evidence.’

What did he have to do?

‘We paraded three nights a week and Sunday mornings, and in a month or so we were marching up and down the wooden floor of the drill hall, stamping our feet like true guardsmen.’

‘On a cold autumn evening it was my turn to perform guard duty at the barrack gates. I stood there at the ‘at ease’ position, or at least my greatcoat did for, although the length was alright for me, it was wide enough for a man twice my weight, and the epaulettes, instead of being on the shoulders, were halfway down my arms.’

‘In an effort to make my chest appear bigger, I had stuffed, underneath my battledress blouse, the thick woollen scarf that Mam insisted on me wearing, but it wouldn’t keep in place, persisting in slipping down to give me a pot belly. The pick shaft, which I had sandpapered and polished to a guardsman’s standard, gave me some feeling of security.’

‘The next big event in my soldier’s career happened when a consignment of 1917 Canadian Ross rifles arrived at the barracks. They were well greased, in excellent condition and sufficient in numbers to equip a platoon. The snag was that only a small amount of ammunition came with them, which had to be kept in reserve in case of an emergency, such as target practice for the officers, or an invasion. We also had instruction on the Sten, a light machine gun that looked as though it had been made from bicycle parts. At least we were beginning to look like soldiers when we paraded.’