You are here: Home>Latest contributions>Film: 'New Towns For Old' (1942) 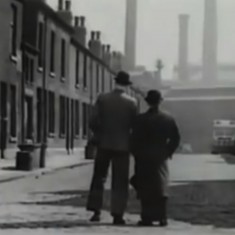 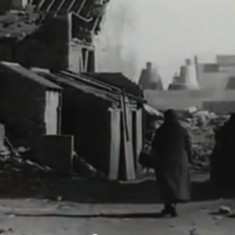 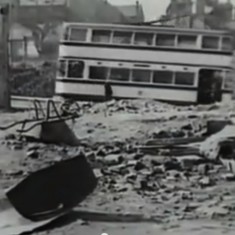 “Commissioned by the Ministry of Information and scripted by Dylan Thomas, this film addressed the need for town planning in Sheffield in the post-war world.  It features two men who discuss pre-war slum clearance and town planning” (YFA)

Although not specifically filmed in Broomhall, this film (scripted by Dylan Thomas no less!) provides a good impression of Sheffield in 1942. Large areas of Sheffield were damaged during the Blitz in 1940, including several streets in Broomhall.

Read more about the Blitz in Broomhall

This hastened the need to replace much of the back-to-back housing, a process which continued after the war. George Orwell had written about the appalling conditions of much of the housing in cities like Sheffield in his ground-breaking 1937 book of reportage, ‘The Road To Wigan PIer”.

Read extracts from ‘The Road to Wigan Pier’

The film opens with a view over Sheffield, with the River Don and a steam train passing in the background.  Two men are standing overlooking factories and houses.  One man has a southern accent, is dressed in a bowler hat, can carries an umbrella.  The other man speaks with a Yorkshire accent and has a trilby and a pipe.

A steam engine is shown shunting in a steel factory.  The men discuss the scene and make their way down a cobbled street away from the factory chimneys.  There are children playing in the streets and on waste ground.  The Yorkshire man says that children should not have to grow up in these conditions.

They then walk down a hill where there are new blocks of flats, both men commenting that the flats are better than what was there.  The Yorkshire man says that both houses and factories should not be in the same part of town.  As they stop outside a ‘Public Cleansing Station’, the other man states that a town cannot just be moved around, to which the Yorkshire man responds by pointing to an area of demolished houses that has been pulled down to plan the town.  He relates that 20 years ago a new council decided to clean up the town.  The film shows the city centre with trams passing near Sheffield Town Hall.

More areas of slum clearance and of the city centre are shown as the Yorkshire man explains the clearance and rebuilding plans.  Then there is open countryside as well as some of the 30,000 new houses that were built.  Children are playing in fields and climbing trees.

The other man questions what they are going to do with the cleared slum areas.  The film goes onto address this issue by showing an office with various maps and designs for future building plans.  More new houses and flats are shown, along with new schools, hospitals and roads, and the ‘green belt’.  The Yorkshire man says that the War has put a temporary halt to the re-building plans, but when it is over, towns must be rebuilt the same way.  The other man asks who is going to make these plans come true, and the Yorkshire man turns around, points at the camera and says, “They are, you are, you are the only folk that can make these plans come true . . . remember, it’s your town.”  The film ends with steam and a whistle.

The principle argument of the film is for separating out housing areas from industrial areas, using the dramatic example of Sheffield to make its point. In the case of Sheffield this led to the Corporation publishing a landmark book, ‘Ten years of Housing in Sheffield’, in 1962, which elaborated its plans to rebuild the city’s housing, replacing the slum areas with multi-storey housing projects built on the slopes of Sheffield’s hills – see the film Park Hill Housing Project and the Context for this, also on YFA Online.  Sheffield was very heavily bombed during the Second World War. This was hardly surprising given its large steel and engineering industry: the only place in Britain that was manufacturing crankshafts for Spitfires, at Vickers, or 18 inch armour piercing shells, at Hadfield’s Steelworks. Yet amazingly only a small proportion of bombs dropped on the city hit industrial targets. (For some interesting titbits on Sheffield during the blitz, and other sources of information, see the Sheffield Forum link in References)

A significant number of documentaries were made specifically on town planning before, during and after the 2nd World War (see the works by Gold and Ward in References). In fact 54 government films were made on urban planning during the war. Although the Ministry of Information was chiefly a propagandist organisation, the idea of social planning was at a height during the war, and so the many radical ideas for town planning around at the time were able to get a limited hearing. The Ministry of Information made other films along similar lines, such as Proud City (1945), focusing on the County of London Plan.

The idea of clearing slums and town planning was not new in 1942. Organisations like the Fabian Society, the National Dwellings Society and the National Reform Movement, all produced proposals for rebuilding slum housing areas towards the end of the nineteenth century. And yet extraordinarily, some free market organisations, such as the Liberty and Property Defence League, in a pamphlet “The State and the Slums” (1884), opposed the very concept of slum clearance.

However, the idea really took off after World War One, with government promises of “homes fit for heroes”. In the 1920s and 1930s the Labour Party in particular pursued a policy of social housing. This continued even during the war, when documents were published on the housing policy to be adopted after 1945.  Several significant pamphlets were issued by the Labour Party, including, ‘Your home planned by Labour’ (1943); ‘Post-war Homes’ (1942), by H.V. Lanchester, published by the Cooperative Permanent Building Society; ‘Castles in the Street’, by E. Mannin; ‘The post-war reconstruction of Liverpool’ (1941), by A.E. Shennan and published by the Merseyside Civil Society; and “Reconstruction of Bombed Buildings (1941), by B.S. Townroe.  Pamphlets were issued by the Town and Country Planning Association, Society of Women Housing Managers, National Council of Social Service, National Land and Home League, Cooperative Permanent Building Society and the Labour Research Department.

Another part of this general movement for social change was Mass Observation.  Founded in 1937 by three young men, who aimed to create an ‘anthropology of ourselves’, it came to an end in the 1950s and was then revived in 1981. During the first years of the war they researched housing needs and published People’s Homes, written by Richard Fitter in 1943, based on this research. Some town planners, like Patrick Abercombie, proposed much greater governmental control in order to build new cities – see the film King George And Queen Visit Hull, also on YFA Online.

What is interesting about this, and similar, films – and indeed with the housing pamphlets published during the war – is that they seem to be aimed at a wide working class audience. It might be thought that those who lived in slums hardly needed to be convinced about the need for better housing, and so these films might be seen as a way of presenting arguments, and as a means of exerting political pressure on whoever was in power after the war. The Labour landslide of 1945 might be partly due to the affect of this pressure for change; although the results might be thought to have seriously failed these great aspirations.

There are reviews of the film in Documentary Newsletter, III 90, and Monthly Film Bulletin (BFI), IX 92.

Enticknap, Leo ‘Postwar Urban Redevelopment, the British Film Industry, and The Way We Live’, in Mark Shiel and Tony Fitzmaurice (eds), Cinema and the City: film and urban societies in a global context,Blackwell, Oxford, 2001.

Sheffield Forum thread on Sheffield in the blitz

Toby Haggith, Castles in the Air: British Films and the Reconstruction of the Built Environment 1939-1951 London: I B Tauris, 2003)