You are here: Home>Explore OUR Broomhall>Topics>Art>George Cunningham: Second World War in Broomhall ~ Part 1

Outbreak of War in Broomhall 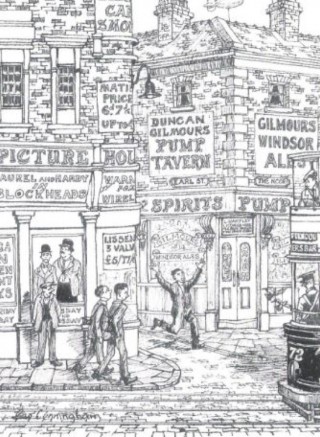 On Sunday, September 3rd 1939 Britain and France declared war on Germany which created a worldwide war. But, also on this day another important event was happening as George Cunningham turned fifteen on this day. He had watched throughout the inter-war years as tension increased between Germany and England, the youth movement of Germany particularly interested him as he could see the hold that Hitler had over the youth of that country.

To start with, the story of that day when the world changed and the war broke out started when Norman and George were taking a stroll down The Moor.

‘Sunday the 3rd September 1939 dawned bright and clear, and it was my fifteenth birthday. I came down to breakfast, rather late. My brother had already gone out, leaving Dad in possession of the table, and Mam was in the kitchen. The wireless was on and a cloth had been thrown over Charlie the canary’s cage so that his chirping wouldn’t interfere with the broadcast, which said that an ultimatum had been delivered to Berlin.’

‘I finished breakfast – always a good fry-up on a Sunday, now that trade was picking up in the pickle business – put on my jacket and said, ‘I’m popping round to Norman’s, and then we might go for a walk.’ My mother’s face was strained and anxious, with the hint of a tear, as she said, ‘Don’t go too far, we don’t know what’s going to happen.’ Outside, Michael Road was quiet and sunny – even Wells’ coconut-matting dog wasn’t out – the sky was blue and sunshine glinted on the silver barrage balloons. I took my gas mask in its cardboard box, on which I had inscribed a rather colourful monogram of my initials, and walked up the entry into Norman’s back yard.’

‘Knowing his usual Sunday morning programme, I didn’t go to the Blackwell residence, but crossed over the yard to the row of lavatories. The door of the third one was ajar and from behind it Norman’s voice, slightly strained, bade me ”Ow do, Georgie, ar’ll not be long. Many ‘appy returns.’ A sound of newspaper being ripped off a nail, followed by a thunderous rush of water, heralded the appearance of Norman, pulling braces over his shoulders and looking relieved as he locked the door. It didn’t take him long to complete his toilet: a quick rinse of the hands, which he dried by smoothing down his hair, and we were off.’

‘For some time now, our Sunday morning pastime had been a walk up one side of The Moor and then back down the other. Somehow, this particular Sunday seemed strangely different; apart from the odd tram, there was little traffic and only a few people.’

‘Suddenly a man dressed in an oil-stained boiler suit and heavy boots rushed out of Earl Street and shouted to no one in particular, ‘Thi’s a waar on,’ then disappeared as quickly as he had come. Norman and I, and one or two passers-by, gazed blankly at each other, then with one accord we all looked up at the sky. It was still there, reassuringly calm and blue. The only things flying were a few pigeons, which had been startled by the announcement. Norman, as ever the realist, exclaimed, ‘We’d better gerrooam an’ ‘av us dinner befoor ‘e starts droppin’ ’em.’ We trailed down The Moor and up Clarence Street. Everywhere was very quiet, not even a shop window gazer or a tab-end collector in sight. A bit of a let-down, I thought, having visualised masses of troops and tanks rushing to the coast to defend England.’

‘Back home my mother was preparing dinner: always on a Sunday a half-shoulder of lamb from Gledstone’s the butcher. She was indeed very worried. My brother was seventeen and I was fifteen, so unless the war was over very soon we could possibly share the same fate as many of her girlhood friends had done in the Great War.’