You are here: Home>Explore OUR Broomhall>Topics>Art>George Cunningham: Second World War in Broomhall ~ Part 3 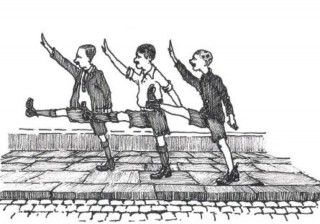 Illustration taken from "By George! My childhood in Sheffield." Page 103. 1987
Photo: Paul Hibbert-Greaves 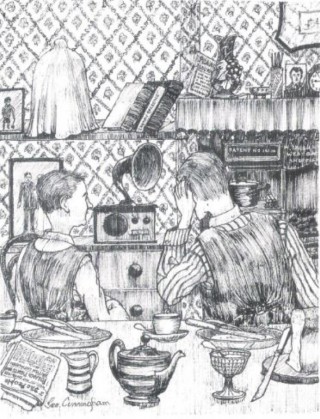 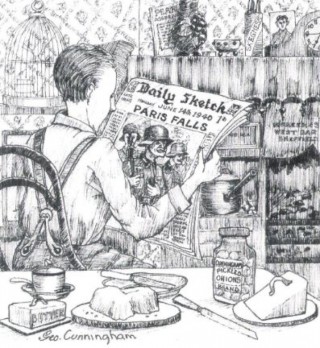 This section shows how the interwar years and the rise in interest in Hitler impacted the lives of children in the country but more importantly Broomhall. Albert Moxay created some entertainment which made the others laugh very much, showing how the rise of worldwide news had been driven into the country’s consciousness.

‘Suddenly he jumped to his feet. I looked up at him and burst out laughing. Under his nose he had plastered a black strip of tar and his arm was raised aloft as he started doing the goose-step in a pair of down-at-heel boots many sizes too big for him.’

‘Norman and I both stuck on a moustache. He wetted his dark hair with spit across his forehead and the three of us goose-stepped up to Moore Street and back, finally collapsing on Smith’s step as on a particularly strong kick Moxay’s boot flew off, sailing high in the air to land on Mrs Wilson’s cat.’

‘Mucky hobbled down the street, put on his boot and had me howling with laughter as with feet splayed apart he shuffled towards us just like Charlie Chaplin. He stopped, sniffed with a look of pained disgust, sniffed again, then bent a leg to inspect one boot heel and then the other, his features registering puzzled relief as he shook his head in bewilderment at the source of the smell.’

This picture shows how George and his dad Sid, are listening to the wireless and reading the newspaper where they are taking in and understanding the world’s news.

This picture shows how George is reading a newspaper again, which is showing how George took an interest in what was going on in the outside world, but also how the outside world impacted George’s life in Broomhall. This means in terms of his imagination as well as his desire and excitement to want to join up, for example with the R.A.F which is shown in Part 4.

‘I went to the Star Picture Palace one evening and the newsreel was taken up almost entirely with pictures of huge rallies in Germany, with hundreds of thousands of Nazis in tremendous torch-lit rallies, which made our Coronation Day turn-out look a bit sparse, to say the least.’