You are here: Home>Explore OUR Broomhall>Topics>Art>George Cunningham: Second World War in Broomhall ~ Part 11 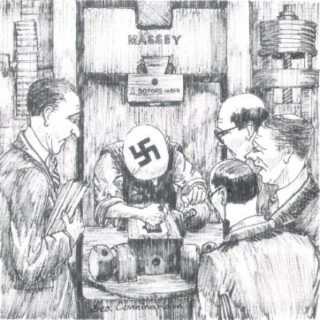 Illustration taken from taken from "More George! Growing Up: The Story Continues..."Page 79. 1994
Photo: The Hallamshire Press

‘One night, Curly and Bill stayed out longer than usual and came back a bit kalied. Curly didn’t bother taking off his boots, but slumped prone on his bunk and went out like a light. Nobody kept watch. We all retired, and in the dim blue glow of the night lamps the entire fire watching squad slumbered peacefully on.’

‘I seemed to have been asleep for only a few minutes when I awoke, wondering where I was, until on the just-discernible clock I saw that there was still an hour to go before I need rise. Somehow, try though I might, further sleep eluded me, so I sat up, thinking that I might go for a walk before breakfast.’

‘My early morning yawn stopped in mid gape when at the top end of the bunk next to mine I could see a ghastly white skull with a black swastika desecrating it. Horror wiped away the last vestiges of sleep. I was transfixed. Had the Germans parachuted in a special unit during the night to massacre my comrades? Perhaps they had been disturbed before they got to me.’

‘Relief took over from these awful conjectures when I heard Mac snore and Squire Rodgers mumble in his sleep. I counted the rest of the motionless forms to make sure that none had been taken as hostages until I plucked up the courage to investigate the grisly remains. It was curly, flat on his back, mouth open in a macabre toothful grimace with the hated symbol of the Third Reich painted on the top of his head.’

‘Who had visited him in the night I never found out, although when we all got up, Mac gave me a sideways nod of the head and a knowing wink. None of us said anything to Curly, who didn’t bother with a wash, but just lit a fag and slouched off downstairs to the forge and started work.’

‘Later that day, I was busy working on a die for a Bofor gun part when Squire came into the shop, laughing his head off. ‘Owd Curly,’ he gasped, inbetween chuckles, ‘wor stampin’ away on ‘is’ ‘ammer, when ‘gaffer cum round wi’ a party o’ visitors. Thi wor sum big nobs from Government wantin’ ter see wot we were dooin’ fer waar effort.’ Squire had to stop for another chortle before he carried on. ‘Thi walked darn forge, noddin’ their ‘eeads as if thi understood what wor gooin’ off, when thi stopped in front o’ Curly’s ‘ammer. He wor stood up, wire brushin’ scale art o’ top die, and when ‘e’d dun that ‘e bent o’er to do bottom un.’

‘Squire had to pause again to wipe his eyes. ‘Tha shud ‘a seen the faces, when thi saw bloody swastika! Gaffer dashed round to Curly, but couldn’t mek ‘im understand becuss o’ noise o’ goffin ‘ammers. Owd Curly kept purrin’ ‘is ‘and on top o’ ‘is ‘eead, but couldn’t feel nowt, so ‘e just carried on stampin’. One o’ big nobs collared ‘owd o’ Alfie ‘oo wor ‘angin’ abart n’ asked ‘im ‘oo bloke were an’ wot ‘ee were doin’ wi a swastika on ‘is ‘eead.’ Squire collapsed on my bench, and gasped. ‘Owd Mac ‘ad towd Alfie this mornin’ that Curly ‘ad been on ‘oliday to Belsen and ‘ad ‘is ‘eead tattooed as a souvenir, so Alfie sed same to this bloke! When ar cum art o’shop, thi wor orl mumblin’ together ‘n one on ’em wor writin’ summat in his notebook.’