You are here: Home>Explore OUR Broomhall>Topics>Art>George Cunningham: Second World War in Broomhall ~ Part 5 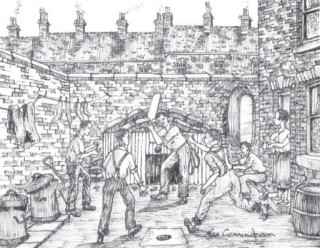 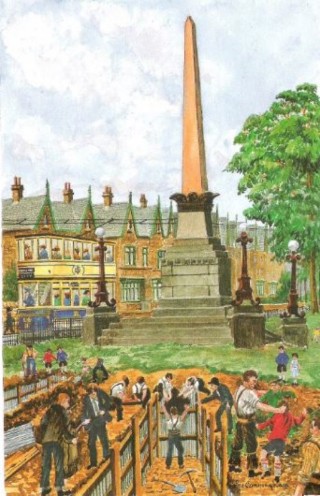 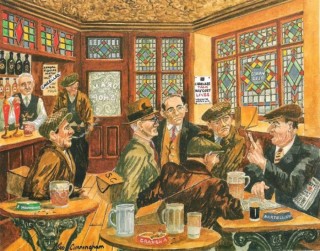 The preparations for war were starting to take place with the creation of Anderson shelters among other things explained in the stories below. John Ramsden shows the change in lifestyle that the war brought for example, ‘the silence of the church bells, to last until they could ring out a message of either of victory or invasion, the sounds of fire engine bells, ARP wardens’ whistles and actual explosions of bombs and landmines.”[1]

‘Gas masks were issued for everyone, even tiny babies. Cellars were reinforced and Anderson shelters delivered by railway horse and dray, to be erected in backyards or garden, if you had one. Our football and cricket games in the evenings and weekends were postponed and the filling and stacking of sandbags took their place.’

‘Norman Blackwell and me helped Frank Parkin and his father, an ex-soldier, dig a square hole and fix up the corrugated iron sheets of an Anderson shelter in the corner of their yard. One of the sheets fell across my wrist, cutting it rather badly, but I bore up bravely, counting it as my first war wound. ‘Come on, let’s have a game of cricket. We can use ‘door o’ shelter for stumps.’ A bat and ball were procured from Norman’s house, their Albert joined in and we batted on until bad light stopped play.’

‘Rolls of brown paper tape were issued by the ARP and I spent an enjoyable Saturday afternoon pasting this in a trellis-like pattern on all our windows. This, we were told, was to prevent pieces of glass flying about in the event of a bomb blast. My mother wasn’t very keen on my efforts, because it was difficult to clean the windows, and, worse still, the tape obscured her view of the goings-on in the street. I don’t think that I consoled her very much by saying, ‘Well, at night-time you won’t be able to see it behind the blackout blind.’

‘The expectation of war started to take on the appearance of reality when workmen started digging trenches in the big field at Endcliffe, to be roofed over and used as air raid shelters.’

‘At the end of July, Cooper Brothers and Son broke up for a week’s holiday. This was a bit of a blow to me, accustomed as I was to a month off from school. The days passed all too quickly. A couple of times Norman, who was also on holiday, and me walked up to Enc’s to watch the men sandbagging the air raid shelters. What a contrast to the years before, when we played endless games of cricket on sun-baked pitches surrounded by lush grass. Now heaps of damp-smelling clay, piles of sand and sacks littered the field. The shelters were dug as trenches, with the sides and top reinforced with sheets of corrugated iron, then covered over with sandbags. Anyone could join in, and soon gangs of kids, youths and men were helping with the work.’

The last picture shown on the right shows the popularity of discussing the war problems and strategies throughout the war.

‘So the phoney war continued, and my father and the rest of the alehouse war cabinet held regular sessions in Kenny McLeod’s, the Devonshire Arms and the Wagon and Horses at Millhouses.’

‘Dad said, when he arrived home from a particularly informative high-level meeting, ‘Old Fred says it’ll be nothing like the last lot. The Germans don’t want another pasting, and anyway, sez Fred, they’ll never get through the Maginot Line.’