You are here: Home>Explore OUR Broomhall>Topics>Art>George Cunningham: Second World War in Broomhall ~ Part 15 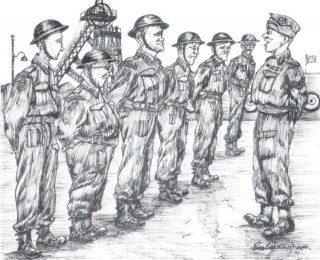 ‘I had served in the Home Guard for well over a year and in that time had been trained to use the rifle and bayonet, Sten gun and the Vickers machine gun. The snag was that I had never actually fired a shot and the only thing I had ever bayoneted was a sandbag suspended from a rope.’

‘There seemed to be hope of some action when Sergeant Major Gibson informed us that our platoon was to march up to the rifle range near the Nunnery Colliery on the Manor for firing practice. We arrived there in a state of excited anticipation, which increased as we unloaded from a lorry boxes of 303 ammunition and stacks of rifles. I was a bit deflated when myself and Big Okker, along with some other privates, were assigned to target duty.’

‘This entailed standing in a deep trench behind the target and signalling each hit with a board on the end of a long pole. After a while it became a trifle onerous, because most of the shots were off course, thudding into the clayey bank behind us, therefore not requiring any signal. It was a relief when, after an hour of this inactivity, we were recalled to the firing positions, filled with eager expectation of having a pop.’

‘Two nights later I reported for duty at the drill hall to find a little band of my comrades gathered in front of the notice board. On it, a terse official communication stated that all Home Guard personnel under the age of forty who worked regular day shifts would be posted to the Somme Barracks on Glossop Road for training on rocket gun anti-aircraft batteries.’

‘My first taste of rocket projector training took place one evening in a large wooden shed, occupying a corner of the barrack yard. A Royal Artillery Sergeant called Bradshaw, too old for active service, gave a brief outline about the functions of the projector outside, then marched us into the shed, where in the middle of the sand-covered floor stood our answer to the bomber.’

‘He eyed some of us rather dubiously, especially me, I thought, when he stated that all gun crews had to have good eyesight and be physically fit, so as to be able to set the fuses accurately and lift the heavy projectiles. I realised what he meant as we underwent our first drill. Each rocket was about six feet long, four inches in diameter and made of thick, heavy sheet metal. The sharp end culminated in a twelve-inch-long-high-explosive shell, with a time fuse in the nose cone.’

‘Sergeant Bradshaw made the demonstration look quite simple, acting as loader whilst an experienced gunner operated the controls. The procedure was to extract, grasping its stabilising fins, the rocket from the loading rack, drop the projectile onto one’s left forearm, run over to the projector, slide the missile up the guide rails, then pull it smartly back to engage the electrical firing contacts.’

‘I had been watching carefully and when my turn came stepped forward confidently, grasped the fins firmly, pulled the rocket sharply from its rack and dropped it smartly on my forearm, which gave way under the weight, allowing the projectile to embed itself in the ground at an angle of thirty degrees.’

‘In the silence that followed, I tried desperately, but without success, to rectify my error, until the sergeant stepped forward, got hold of the rocket with one hand, pulled it out of the ground and replaced it in the rack. Once I became proficient, I found the life of a gunner, albeit part-time, enjoyable, and looked forward to the nights at the Somme, even guard duty.’