You are here: Home>Explore OUR Broomhall>Topics>Art>George Cunningham: Second World War in Broomhall ~ Part 9 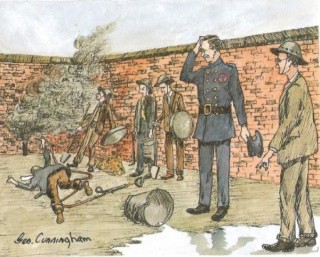 This story made me laugh very much and shows the training that the people of Broomhall undertook! The reason this story made me laugh so much is because of the way that George describes and explains his story, and this is not the only one, as all of the other stories are as detailed as this one below. The fact that George could remember his stories so clearly and the fact that he wrote them down for the world to see is fantastic.

‘The old proverb ‘Locking the stable door after the horse has bolted’ proved correct when, some time after the blitz, the Government issued an order that teams of fire watchers must be formed to protect houses and factories.’ ‘According, groups of men over the age of sixteen, including myself, was directed to St Silas, my old school, for courses of instruction on dealing with enemy conflagrations. During the last big air raid, the Luftwaffe had rained down on Sheffield hundreds of high-explosive bombs, several land mines and thousands of incendiary bombs.’ ‘To save Sheffield from destruction if this were to happen again, each team was issued with a bucket to contain water, a stirrup pump, sand, a long-handled scoop and a dustbin lid. On a pleasant summer evening in 1941, little groups of men and youths carrying this equipment straggled past the big wooden gate into my old playground.’

‘An officer from the AFS lined us up in some semblance of order and proceeded to tell us what to do in the event of an attack from the air. ‘What you ‘ave t’ do when an incendiary bomb falls near is operate in teams of three. The leading man runs with the hosepipe as near as ‘e can to the missile, flings ‘imself flat on the ground, an’ shouts in a loud, clear voice, “Water on!”‘ He paused, allowing time for this to sink in, before continuing.’ ‘On hearing this, the man in charge of the stirrup pump will commence pumping. The jet of water will be directed by the hose-man, not on the bomb, but on the conflagration it has caused.’ Again he stopped talking, looking enquiringly at us in case it was becoming too complicated. ‘The man with the scoop, protected by the bin lid, can cover the bomb with sand, then convey it to a place where it can do no ‘arm.’

‘Our gallant team of fire fighters consisted of Georgie Hill on the hose, my father working the pump and yours truly with the bin lid and the scoop, because I had long arms. The instructor ignited a smoke canister, to simulate an incendiary in a corner of the yard, bellowed ‘Action stations!’ and we sprang into activity.’ ‘Georgie, a heavily-built forge hand, still wearing a sweat towel and clogs because he hadn’t had time to change, lumbered across the yard with the hosepipe, uncoiling it as he went. He was going well, at a fair lick, when he stumbled, the pipe tangled around his legs and brought him down with a tremendous crash onto the asphalt. The pipe jerked the stirrup pump, causing the bucket of water to cascade over the yard and my father’s shoes.’ ‘Georgie gallantly heaved himself upright and broke into a gallop, dragging behind him the hosepipe, stirrup pump and the empty iron bucket. He pitched headlong onto the ground as he neared the target, raised the nozzle triumphantly aloft and trumpeted, loud and clear, ‘Watta on!’ ‘I had my scoop full of sand ready to cover the bomb, but, when I tried to lift it, it was too heavy, and anyway the smoke was making me cough so badly I had to drop the scoop, and, with shield lowered, I leant against the wall like a stricken gladiator awaiting the coup de grȃce.’ ‘In the silence that followed this performance, my eyes cleared long enough for me to observe our instructor take off his cap, and for a moment I thought he was about to fling it to the ground and stamp on it in his chagrin. Instead, he closed his eyes for a few seconds, as if praying for guidance, scratched his head, replaced his cap and muttered quietly, but with feeling, ‘F*** me!’