An 1880s Sheffield Business Directory shows the company Thomas Shearer & Co being located at Tudor Works in Bishop Street.  This was on the site of the old Court House and Prison of the Lord of the Manor of Ecclesall.  In 1843, part of the premises was converted into cutlers shops with grinding wheels. The jail was built in 1771, in Jail Street, also known as Tudor Street, which later became Thomas Street, off Sheffield Moor. It was used as a debtors jail until 1854. After 1854 the room over the engine house was used as a County Court. It was then used as a schoolroom for St. Silas Church. In 1865 the property was sold and occupied by a Mr. Shearer, a sheep shear manufacturer, possibly Thomas Shearer or his father. 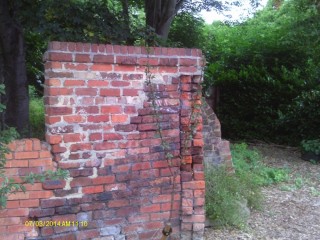 The wall at the Jubilee allotments, 2014

Robert Smith emailed us to tell us about the factory belonging to his grandfather Harry Shearer who owned A. E. Shearer & Co from the 1920s to the 1950s.  He remembers it being up a small lane opposite St Silas Church.  There is a small back lane opposite St. Silas Church, but this would be some distance from the address of 176 Broomhall Street given for the factory in the 1932 Sheffield Business Directory.  This address would be on the opposite side of the present dual carriageway on part of Broomhall Street close to Bath Street that has now been demolished.  There were factories near this location and the company may have been based in Pyramid Works which is shown on some old maps.  It is possible that the factory was large and extended for a long distance between the back lane opposite St. Silas Church and Bath Street.  It may also be that this company had more than one factory in Sheffield.  A. E. Shearer & Co. made sheep shearing equipment.  The company was quite successful and exported equipment to New Zealand and Australia.  This photograph was taken of a wall in the allotments opposite St. Silas’ Church.  Was this the wall of the old A. E. Shearer factory?

An Auctioneer’s Sales Notice is reproduced below from the original auction at which the property was sold to a Mr. Shearer in 1865. This reference to the auction of the property appears on the picturesheffield.com website.

Freehold property in Tudor Street and Bishop Street. To be sold by auction by Mr. Geo. Eadon, at his auction rooms, Haymarket, on Tuesday the sixth day of June 1865. Consisting of a dwelling house with out offices and various buildings, formerly used as the Court House for the Manor of Ecclesall, and as prisons for deptors. Area of 951 superficial square yards.

Thank you to Robert Smith, relative of Thomas Shearer for the information in his email.