You are here: Home>Explore OUR Broomhall>Topics>Art>George Cunningham: Characters of Broomhall ~ Part 3 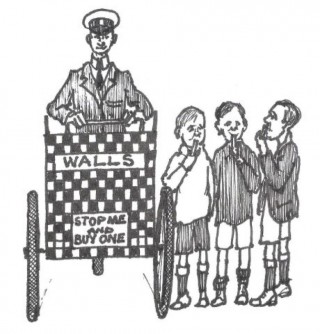 Illustration taken from "By George! My childhood in Sheffield." Page 34. 1987
Photo: Paul Hibbert-Greaves

“Ah’ve seen Ice Cream Man,” he spluttered, “Ah ‘ave, tha knoaws.” And he sucked air in triumphantly as I expressed my disbelief. Sure enough the clopping of hooves and a rattle of wheels heralded the arrival of Granelli’s cart, resplendent in fresh paint and gleaming brass. The first ice cream of the year, well doused with raspberry vinegar, was a moment to savour and the jovial Ice Cream Man was soon surrounded by a crowd, most of whom hadn’t the price of a cornet but were still glad to see the harbinger of Summer.’

‘As the day went on, Vinny and I, now joined by Norman, vied with each other to be the first to spot another. I was the first to see one of Cuneo’s, then Norman, running in front of us up Clarence Street, spotted Mr Dale pushing his wooden cart, but Vinny scored the ultimate triumph of the first Wall’s. Very smart it was too, the three wheeler with its blue and white squares and Stop Me and Buy One sign. It was being pedalled along by a redfaced young man in a neat linen jacket and a cap with a shiny peak.’

‘Vinny stopped him and asked for “Two Sno Frutes, please.” The three of us stood up on the tricycle’s wheels and watched the man lift a lid and delve into his frozen treasure chest. It was so cold inside that a white vapour rose on the air and so too were the ices, encased in three-sided cardboard cases. Vinny lashed out tuppence and very generously gave Norman and me a Sno Frute to share between us. I didn’t tell them that I had a whole Saturday penny untouched in my pocket, but I overcame my feeling of selfishness by a resolve to make it up to Vinny sometime.’