You are here: Home>Explore OUR Broomhall>Topics>Art>George Cunningham: Characters of Broomhall ~ Part 4 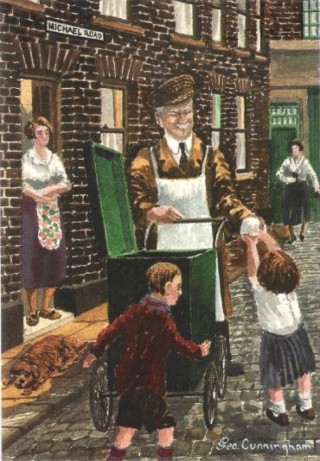 ‘Wells’s dog raised its head to show a glazed eye and a pink tongue panting under the weight of his coconut matting coat in the heat of the sun. He pricked up his ears and gave a muffled woof of warning before slumping down, satisfied that he had done all that could be expected of any self-respecting animal on such a hot day. The reason for all this frenzied activity was the arrival of Mr Shaw who had just come round the corner of Humble Road.’

‘He was a tall, thin man with a white moustache and he was in his summer dress of cloth cap and long brown smock with an apron in front of it. He was pushing a high-sided green wooden box mounted on four pram wheels. I slid off the wall and sauntered along the causey to where he had stopped. Mr Shaw never shouted his wares, indeed no one had ever heard him raise his voice above its usual mellifluous tone, but the lifting of the lid on his wooden contraption was the signal for people to come out of their houses and surround him.’

‘Smiling benignly on one and all he lifted out the top tray and displayed the freshly baked big round scones, still warm from the oven and cut deeply with a cross so that you could break them into four pieces. Powder cakes nestled pale and delicate at the side of their sunburnt cousins, the tea cakes, which were rich with candied peel and currants and were deservedly popular, hot or cold. Tray after tray, each lined with a snowy white cloth, appeared from Mr Shaw’s cornucopia with a dexterity worthy of Professor De Lyle. Jam and lemon tarts, Eccles cakes, sugar sprinkled and plump, cream buns with their butterfly wings and splodge of red jam peeped demurely out of frilly paper cups waiting to be wrapped carefully in tissue paper and carried home for Sunday tea.’

‘I splashed out a penny on one of these and retired back to the wall to eat it, licking each finger clean and picking every crumb off my jersey. Hunger satisfied at least for the time being, I screwed up the paper cup and flicked it at Cerberus who twitched and lifted a sleepy ear but declined to open his eyes. Mr Shaw trundled his mobile confectionary to the next stopping place in Clarence Street, and Michael Road settled comfortably back into its Sunday afternoon somnolence.’