You are here: Home>Explore OUR Broomhall>Topics>Shops and Trades>A Punch bowl set by Viners of Sheffield

A Punch bowl set by Viners of Sheffield

A cutlery and silver plating factory 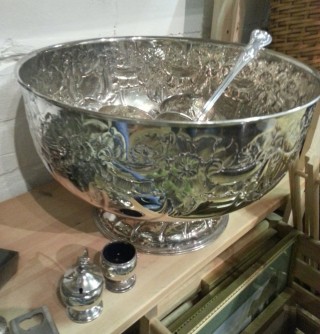 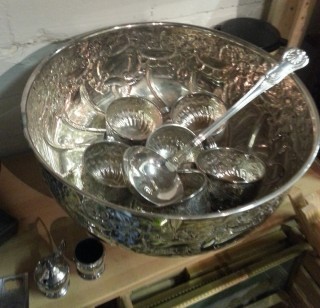 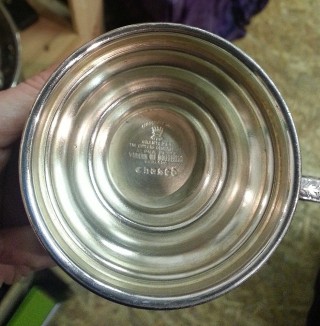 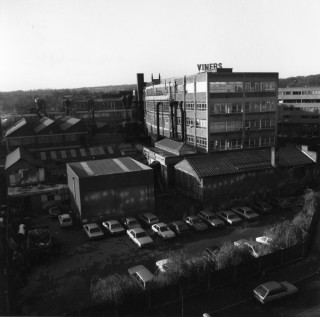 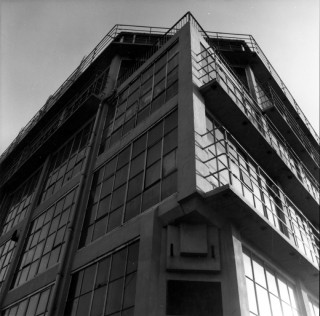 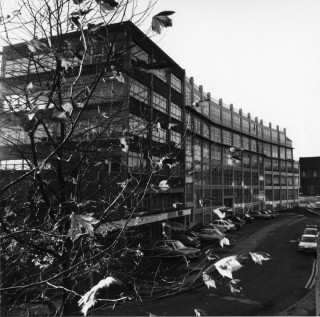 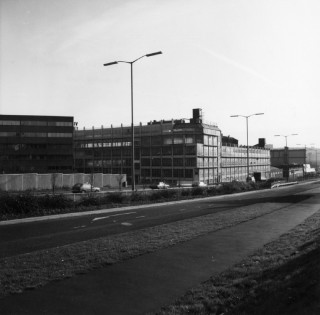 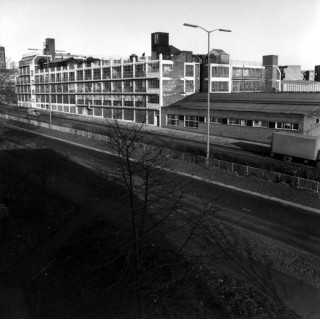 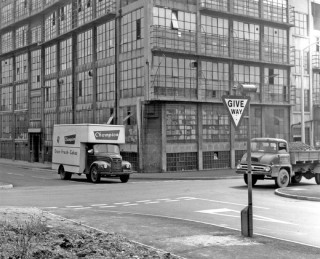 This punch bowl and set of cups is silver-plated and was made by the Viners company in Sheffield.  Silver plating is done by depositing a layer of silver a few millionths of a metre thick on another metal, called the base metal.  This is usually done by electrostatic plating, using an electric current.  Today the base metal is quite often stainless steel, but silver plating existed before stainless steel.  In the early days a metal called nickel silver was used as the base metal.  Nickel silver is an alloy of nickel, zinc and copper – it doesn’t contain any silver.  Nickel silver is still sometimes used as a base metal because it is easy to recoat it with silver – the silver plating wears off over many years.  The thickness of silver is between 10 and 40 microns (millionths of a metre) according to how long the silver plating is expected to last.  10 microns is intended to last for 10 years, 40 microns is intended to last for 40 years.  The cups and punch bowl have a heavy feeling, and might be made out of nickel silver rather than ordinary stainless steel.  If they were bought in the 1970s for a wedding, and are still highly shiny, they have lasted very well and this could be a very high quality product.  The hallmark clearly identifies the manufacturer.

Wikipedia says Viners was started by Adolph Viener and his sons around 1901, which is unlikely. Adolph Viener is listed in the 1911 census as being 27 years old and being a Silver Plate Manufacturer.  Adolph would have been 17 in 1901, although it was possible he was working as a Silver Plate Manufacturer then as he would have been of working age.  In the 1911 census he had one son called Ruben Viner, then 3 years old, who became the manager of Viners in the 1960s.  The family lived at 32 Botanical Row or Road (the street name on the census form is difficult to read.)  The official Viners history website says the company was begun in 1906 by Willie and Emile Viener.  It is thought that Adolph Viener was embarrassed about his German nationality and sharing the same first name as Hitler.  This may account for the anglicised company name Viners rather than Vieners. The company specialised in silver plated products and also manufactured stainless steel cutlery.

Viners grew to be the largest cutlery company in the UK.  They had a factory in Sheffield and subsidiaries in Ireland, France and Australia.  East Asian imports began to flood the UK in the mid 1970s.  Viners started importing cutlery and polishing it in the Sheffield factory.  The cutlery still had the ‘Made in Sheffield’ stamp on it.  The firm experienced some financial difficulties due to the cost of borrowing money to expand.  Ruben Viner retired in 1980 and the company went bankrupt in 1985.  Viners cutlery is still manufactured by the US company Oneida.  Historical cutlery made in the original Viners factory is still available second hand on the internet.

This picture of the Viners factory was taken in 1982.  The Viners sign can be seen on the roof.  The car being driven past is a Ford Fiesta.  A Hillman Hunter and a Vauxhall Chevette can be seen in the car park.

In the 19th century factories had to be built very close to housing so that people could walk to work.  There was no public transport.  Tram services began in Sheffield in the 1900s. Buses were not introduced in Sheffield until 1913.  Although cars had been invented by the 1900s, most working class families would not have them until the 1960s.  During the 19th century Broomhall became a sprawling area of factories surrounded by tightly packed back to back houses.

After the second world war, town planning began to create industrialised areas on one side of a city and residential areas on the other.  Look at a modern day map of Sheffield or any other major town and you will see huge industrial estates concentrated into areas away from housing.  The 19th century industrial areas of Sheffield eventually began to be redeveloped.  This took a long time in Broomhall and in some areas you can still see one or two factories in residential areas and some back to back houses.  The area around the Viners factory was not redeveloped until the late 1990s. Today the site of the Viners factory is a housing estate on which flats and a park have been built.

This area, where houses used to be located alongside a massive industrial plant, is now a pleasant modern housing estate which has all been built up within the last twenty years, far more pleasant than living in the shadow of a huge factory.  Today there is no reason why people have to live in close proximity to where they work but children still like to walk to school.  The houses and flats have been built around the local primary school where children can now play in the fresh air without the industrial smoke which would have once been there.  Springfield School has been there since 1876 and would have been in existence when Broomhall was a heavily industrialised area.  The school is the old building at the front of the photograph.

Explore more about Viners and silver plating with these links:

Basic information and timetable of Viners

See a photograph of Viners staff from the 1930s here