You are here: Home>Explore OUR Broomhall>Topics>Art>George Cunningham: Characters of Broomhall ~ Part 11 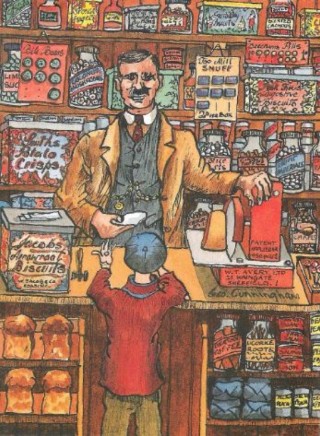 The signs of progress were not met with much happiness in the Cunningham household!

‘At the corner of Clarence Street and Michael Road, Mrs Smith’s shop provided our neighbourhood with most of the necessities of life. Butter, bread and cakes, jars of spice stood side by side with tins of John West salmon and Del Monte peaches, the highlight of the week for Sunday tea, and blue paper bags, plump with sugar, were kept well away from the bars of hard red carbolic soap and packets of mothballs.’

‘One morning before school, my mother sent me across the street for a quarter pound of bacon for my father’s breakfast and a small tin of Bile Beans for his liver. ‘He says he feels a bit queasy this morning and they might buck him up,’ she said, giving me a tanner, adding, ‘Watch out you don’t drop it down the grate.’

‘Behind the counter of the dark little shop, Mr Smith turned and smiled at me as the doorbell tinkled. He was a heavily-set, stocky man with a bushy walrus moustache and neatly-cut hair, parted and brushed across his forehead in the military style. In the shop he always wore the waistcoat and trousers from his navy blue serge suit under a brown smock, which he left unbuttoned. A gold Albert looped across his stomach into his bottom waistcoat pocket, from which he often produced with a stylish flourish, then a flick of the lid, a shiny gold hunter watch.’

‘According to Mr Smith, who never ceased to extol its virtues, there never was and never had been another timepiece with such accuracy. On one occasion, it was said, he was listening to a friend’s wireless with his watch at the ready, and when the chimes boomed out from London he nodded his head disparagingly and remarked, ‘Big Ben’s a bit slow tonight!’

‘His face lit up with a proud smile when I asked for the bacon, and, with the air of someone about to reveal a great treasure, he lifted a white linen tea cloth. ‘What about that then? You’re our first customer for the new bacon slicer.’ I wasn’t too pleased about this as I had been looking forward to Mr Smith’s usual performance, honing on a butcher’s steel a long thin-bladed carving knife which he tested for sharpness by shaving the hairs of his forearm.’

‘He put on quite a show for me, clamping the piece of bacon down on the spikes, then pushing the table forward as he turned the round steel blade. There was a quick swishy sound, and two or three rashers of bacon were neatly caught by Mr Smith in a sheet of greaseproof paper.’

‘I told my mother all about this when I came back, but she didn’t seem very impressed. ‘I suppose he’ll put the price up now to pay for the machine,’ she sniffed, adding as she unwrapped the little parcel, ‘It doesn’t cut it as good as he used to with the knife. It’s just like pink lint, there’ll be nothing left when it’s fried.’ My father swallowed the Bile Beans, gulping them down with a glass of water. He did look a bit yellow, even though the gas wasn’t on.’

‘When his breakfast was put before him, he looked at the crisped-up bits of bacon and poked them around the plate with his fork. ‘If this is progress, I don’t reckon much to it,’ he said, belching politely behind his hand as the pills took effect. ‘What with flying round the world and one thing and another. It says in the paper we’ll be sending rockets up to the moon in a few years’ time. It’s all baloney – even if they did land on it, they’d be stuck there forever.’ When I asked him why, he chuckled and retorted, ‘Because the moon’s made of green cheese, didn’t you know?’