You are here: Home>Explore OUR Broomhall>Topics>Art>George Cunningham: Characters of Broomhall ~ Part 1 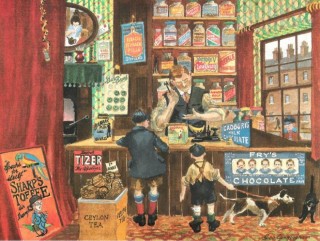 The paintings also tell the story in just as much detail as the written down stories and are equally as fantastic. George has not just created a store house of stories and memories but with most of the characters we can see what they looked like so the characters of Broomhall will not be forgotten.

Characters of Broomhall has been divided into seventeen parts so that the reader can see a particular picture with a particular story, which I have identified from the two books that George Cunningham wrote. But, to see further or fuller stories please see the copies of the books (By George! and More George!) and their are copies available in the Sheffield Central Library.

‘I was growing quickly and I could see well over Clay’s windowsill and so invariably I was tempted into the shop. It was a back-to-back house and the living room had a thick red curtain stretched across part of it and a little wooden counter built near the window. This was the shop part, which was stocked with every mouth watering confection, tried and tested by generations of chompers and suckers.’

‘There were coconut mushrooms sprouting next to the spice fish, chocolate dragees by the hundred, and little piles of marzipan tea cakes sitting sedately between the acid drops and the mint imperials. All this variety, together with the toffees with their different flavours – rum and butter, Devon cream, cinder, nut and raisin – all made a decision difficult. A pair of brass scales and a tiny iron hammer graced the counter top, flanked by tins of the more popular spice.’

‘I made my choice, “A ha’porth of Devon cream, please.” And I watched with drooling mouth as Mr Clay took a square of toffee in the palm of his hand and deftly broke it into mouth-sized lumps with taps of the hammer. On the wall behind him a mirror hung, so that the family could relax in their living quarters and still keep an eye on the shop. If I stood on tiptoe I could also enjoy a peep at the pleasant domestic scene on the other side of the curtain.’

‘The large family, seated around the big table in front of a black gleaming range winking with firelight, always seemed to be surrounded by the delectable aroma of roast beef or succulent stew which wafted across my nostrils as I sniffed the air like a Bisto kid. It was music to my ears as Mr Clay dropped the toffee into the scoop, then poured the lumps into a paper bag, swept up a few crumbs with the side of his hand and added them, without charge.’