You are here: Home>Explore OUR Broomhall>Topics>Art>George Cunningham: Characters of Broomhall ~ Part 8 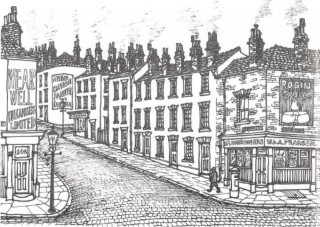 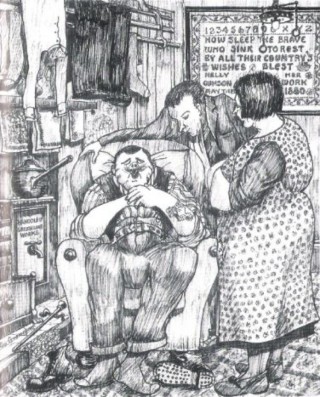 ‘In its flickering light I could see the form of a man half laid in an armchair, with his head back and snoring loudly. ‘It’s a good job ar spotted thi, Georgie,’ whispered the fair lady. ‘Thi art next dooar, an at other side ‘e’s as deaf as a bloody ‘addock.’ She continued, ‘Gas mantle’s bust, ar’v gorra new un, jus purrit on fer me. Wi bein’ s’ tall tha can reach up better than me.’ I took the fragile inverted mantle from its cardboard container and carefully fitted it into the holder. I took the candle and pulled down a chain attached to the pipe. There was a faint hiss, a pungent smell of gas, a plop as it ignited, and the room was bathed in a warm, greeny- yellow light. ‘That’s better,’ said Mrs Gumson quietly, ‘Ar doan’t know wot ar would a’ done if ar an’t seen you passin’.’

‘E’s on mornins, an ‘e’s just ‘ad ‘is tea an’ ar din’t want ter wekken ‘im,’ indicating the man in the chair. He was in his fifties, very portly, his unbuttoned waistcoat revealing an expansive union flanelled stomach encircled by a wide leather belt, studded with army cap badges. The heavy jowled face sported a large moustache which, as he exhaled after every snore, fluttered in the breeze like a banner. His hands, comfortably clasped over his stomach, were surprising white and hairless, as were his thick forearms. A large colourful tattoo on one of them intrigued me enough to take a closer look.’