You are here: Home>Latest contributions>George Cunningham: Characters of Broomhall ~ Part 6 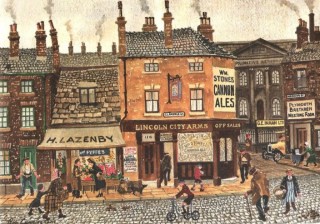 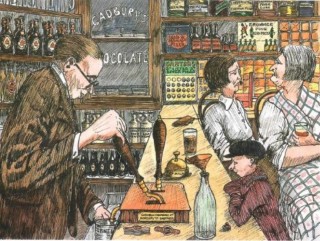 Mrs Gumson and Nellie Slatter were two characters who re-occurred throughout the two books that George Cunningham wrote. To see further stories relating to these two characters see Characters of Broomhall Parts 6- 9. They were also heavily involved in the Victory in Europe Street party which is Part 17 of the Second World War in Broomhall stories.

‘Now that I had come of age it meant that I could be entrusted to fetch the beer. I started off being sent at lunchtime to the Lincoln City Arms in Clarence Street. This hostelry occupied a position at the corner with Hodgson Street and consisted of two public rooms at the rear whilst the front part was a beer-on. Most of the necessities of life could be bought here – from groceries to castor oil- and it was a meeting place for the local ladies who could do a little shopping and enjoy a gill or beer at the same time.’

‘The room was sparsely furnished with two chairs, which were usually filled by Mrs Gumson, a well-endowed person of indeterminate years, who was also toothless, but insisted on carrying a set of false teeth in her coverall pocket, “In case,” as I often heard her state with some gravity, “I ‘av an accident”. Her steadfast companion and confidante, Nellie Slatter, was her next door neighbour and a patient listener and sympathiser to her friend’s many trials and tribulations and could be relied on to come forth with a gasp, a cluck of the tongue or a telling remark at the appropriate time. They often broke off their conversation when I walked in to smile and ask “Ah’s yer Mam, Georgie?” and then whisper to one another with meaningful nods of their heads.’

‘As I stood at the counter watching Mr Broadley fill my bottle through a copper funnel, Mrs Gumson said, “Ah see Lottie’s expecting ageean.” She paused to have a sip of beer and delicately wiped the froth off her top lip whilst she did some mental arithmetic before continuing: “That’ll bi twelve, not countin’ misses.” Nellie’s mouth turned down at the corners in agreement, as she observed: “Ah doan’t know ah ‘er owd fella dus it, ‘e’s such a little bloke, it’s like chucking a Park Drive darn an entry.”

‘This remark convulsed her friend into such a spasm of mirth that she had to pat her ample bosom and hold an handkerchief to her mouth to regain her composure. Mr Broadley pulled an extra squirt of froth to top up the bottle, screwed on the cap and sealed it with a label. “To stop you ‘avin’ a sup on the way home!” he always joked. I bade farewell to the ladies and walked down the street wondering what Lottie was expecting and why it had anything to do with cigarettes.’