You are here: Home>Explore OUR Broomhall>Topics>Art>George Cunningham: Characters of Broomhall ~ Part 9 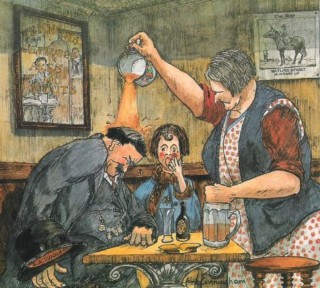 ‘About eight o’clock it was my turn to go out for half an hour. Squire Rogers, my usual companion, declined to accompany me, saying, ‘Ar’ve got guts ache,’ so I sallied forth alone into the dark streets. Not very far, though, because it was raining, so I strolled across Broomhall Street to the Poplar Tavern.’

‘The dark-pannelled and wooden-seated hostelry was presided over by Walter Wragg, uncle of Sheffield’s famous jockey, Harry Wragg. He beamed at me as I came in, probably because, except for a couple in a corner of the best room, the place was empty. I stood at the tiny bar, which had the advantage of a good view into the two rooms that comprised the pub, and slowly drank a pint of Tennant’s.’

‘It was so good I ordered another and decided to sit in the best room, which although dimly lit was warmer than the dram shop, which didn’t have a fire. The couple opposite me didn’t look up as I entered and took a seat just inside the door behind the high side of the wooden land settle. They seemed engrossed in their own company, staring into each other’s eyes, even when drinking.’

‘The woman’s face was vaguely familiar, even in the shadowy room, and it was with a jolt of surprise that I recognised the fair features of Nellie Slatters, Mrs Gumson’s best friend. Why I didn’t know her at once was because she had a kiss curl, twin patches of rouge on her cheeks, lipstick and, at the side of the left eye, an alluring back beauty spot. A fur boa, which had seen better days, and even at my distance smelled strongly of mothballs, girdled her scrawny neck which protruded from a long blue coat. I was even more surprised when I turned my attention, trying not to be nosy, onto her gentleman companion.’

‘It was most definitely Mr Gumson. His bowler hat, tipped to the back of the head for comfort, set off his florid face and bushy moustache to their full advantage. He was wearing a navy blue serge suit with the jacket open to display his manly waistcoated ‘corporation’, which was embellished by a silver Albert from which hung several medals. A full half of his beer disappeared in one swig, which brought admiration from Nellie. ‘Whew!’ she exclaimed, before taking a demure sip of her shandy, ‘Y’ can’t half knock ’em back, Oliver, it’s no wonder y’ looks well. Ar wish my owd man’d tek a drink or two, it might liven ‘im up a bit.’

‘I felt a draught of coldness enter the room, and there, framed in the doorway, almost filling it, was the formidable figure of Mrs Gumson. After an eternity of silence, Mr Gumson, as if mesmerised, or like someone waking from a bad dream, cleared his throat and in a strangled voice croaked weakly, ”Ello luv, what are you doin’ ‘ere?’

‘With that, she marched up to the table, Oliver cringing as she approached. Nellie’s eyes opened wide with horror, fearing the worst. I held my breath – was I to be a witness to bloodshed? Mrs Gumson seized Nellie’s drink, paused as if to throw it in the paramour’s face, but instead she drank off the Guinness in one gulp. She turned her attention then to her husband. Grasping his full pint, she again took her time, holding the pot up high. Then with a magnificent gesture, she poured half the beer into her jug, knocked off Oliver’s bowler and baptised him with the other half.’

‘He, once a figure of grace and charm on the ballroom floor, alehouse Lethario and breaker of hearts, sat there stunned as the beer ran over his brilliantined hair, down his nose and dripped off his sodden moustache. His wife, as if this act had exhausted her passion, sat down heavily at his side and took a swig out of the pitcher. The soothing effect of this potion appeared to please her, so she drank the rest, put down the jug on the table and regarded the chastened pair with the righteous superiority of an innocent, mistreated woman.’