You are here: Home>Explore OUR Broomhall>Topics>Art>George Cunningham: Characters of Broomhall ~ Part 17 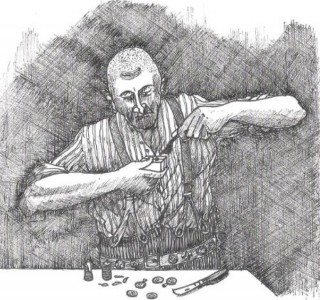 Illustration taken from "By George! My childhood in Sheffield." Page 65. 1987
Photo: Paul Hibbert-Greaves

‘Next evening I was on my way to the Anvil, amusing myself by rattling a few conkers in the jug. Harry Flathers was sitting on the step of his house, busily engaged in carving his initials on the door-jamb and making a good job of it judging by the amount of chippings. Our relationship at school continued to be mutually beneficial but I thought a little extra gift would do no harm, so I gave him some conkers.’

“Ee, that’s reight gud on thi, Georgie,” he said. Then dropping his voice he looked furtively over each shoulder, this was a habit of his even though he was standing in his own doorway: “Promise tha’ll tell nobdy an ah’ll show thee ar t’mek a King Conker,” he whispered hoarsely. I crossed my heart and hoped to die, something one didn’t do lightly, and followed him over the threshold.’

‘By the fireplace in the darkened room, the curtains being closed, a large man who had the long nose of the Flathers, although it was rather bent, squinted at me. “Oo’s ‘ee?” was his pointed enquiry. “It’s arl reight, faather, ‘ee gus t’schoil wi’ me, ‘ee’s pickle man’s lad.” Satisfied as to my identity and credentials, Mr Flathers resumed his task which our entry had interrupted.’

‘On the coalfire, which was burning fiercely, nestled a little iron ladle filled with shiny liquid metal. He cut a few bits of lead off a flashlamp battery and added them to the alloy, at the same time skimming off the dross with a piece of wood. In his other hand he grasped a small block of plaster with a hole in it. Judging the moment to a nicety he removed the ladle from the fire and poured a tiny drop of its contents into the orifice. A second later he broke the block in two halves and out tumbled a bright new shilling.’

‘I sat entranced by this legerdemain, but young Harry merely remarked, “‘Ee puts ’em in fag machines – tha wants t’cum just afore Christmas when ‘e’s mekin’ haifcrowns.” He then proceeded to show his own skill by seizing the bread-knife and sawing the top off a conker. Using his pocket knife he scooped away all the nut until only the shell remained.’

‘ I found all this very puzzling and even more so when he produced a length of string and wrapped some battery lead round one end. “It gi’es a bit o’ weight, tha knows,” he confided, stuffing it into the shell. Enjoying my mystification he mixed plaster and water into a thick paste and filled up the cavity, smoothing the top into a very good imitation of the real thing. “A bit o’ muck rubbed into that when it’s set, nob’ dy’ll tell difference,” said its creator. He lived up to his boast next day at playtime when I watched him demolish six conkers and Sos Hadley’s knuckles in record time.’

‘Mr Flathers was in such a high good humour with the amount of currency he had coined that he laid aside his equipment, took off his shirt to reveal a singlet of extraordinary grubbiness and with braces dangling he squared up and demonstrated how Johnny Cuthbert knocked out Jim Hunter and became British champion. “Ee ‘ad ter gu orl way up ter Scotland, but ‘ee still licked ‘im,” enthused the Master of the Mint, bobbing, ducking and weaving around the kitchen table.’

‘I suddenly remembered the true purpose of my errand so I said goodbye, leaving Harry and his father engaged in a lively bout of sparring. I ran as fast as I could to Kenny McLeod’s, but with three gills of Hallam in the jug my journey back was much slower. When I arrived Dad asked me if the pub had been closed, because he thought I must have gone to the brewery. Being on oath, as I was, how could I tell him that I had been watching the alchemist and his apprentice making bright shiny shillings and an unconquerable King Conker?’