You are here: Home>Explore OUR Broomhall>Topics>Art>George Cunningham: Characters of Broomhall ~ Part 13 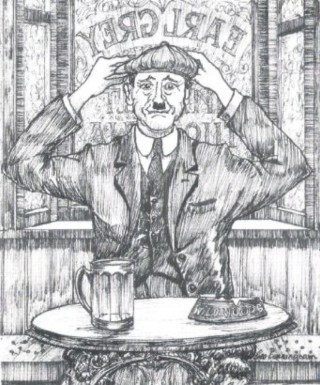 ‘As we walked round a door opened and a man greeted us. “Nah then, Sid is this your big lad, then?” He was rather a stout individual dressed in a navy blue suit, a light grey flat cap and shiny black boots. A little toothbrush moustache bristled under his nose as with a tipsy friendliness he lifted my cap, ruffled my hair and produced a penny from it. “There y’are,” he remarked, gratified by my astonishment, as he handed it to me. “I bet y’didn’t know that was there!” On top of my Saturday penny- this was wealth indeed!” “Say thankyou to Mr Milichips,” my father instructed me. As soon as they went through the door I nipped along to Mrs Holmes’s shop and lashed out some of my fortune on a ha’porth of tripe bits, well seasoned with salt, pepper and as much vinegar as the paper would hold.’

‘Mr Millichips, who was having a rest from work, took the post of head salesman on a commission basis. At the end of his first week he brought in his first batch of orders to our house. He entered, as he always did when on business, with an apologetic cough and a flat cap pressed to his chest like a large tweed poultice. Declining, with a polite gesture of his hand and a flicker of nausea, Mam’s offer of a cup of tea, he placed a small pile of papers on the table, gave me a penny, inclined his head to my mother, said “See you later, Sid” and eased himself out of the room. Through the window I watched him replace his cap. This he did with one hand at the front and the other at the back. When it was nicely in position he gave the neb a firm half turn to the left, as if to lock it in place.’

Sorting Out The Orders

‘Dad cleared a corner of the table and asked me to help sort out the orders. In the absence of a proper order book Mr Millichips had written on whatever stationary was nearest to hand. Two or three white spice bags had small orders on them, a sheet of blue paper still bearing traces of sugar was covered with a series of hieroglyphics which my father translated with some difficulty. A margin of the Sporting Life had been pressed into service bearing an order for three mixed pickles, two red cabbage and a large piccalilli, underlined by the runners and riders at Chepstow and Captain Kettle’s Late Wire.’

‘Mr Millichips also favoured the use of a copying ink pencil which he frequently licked, thus imparting a romantic mistiness to his writing. Anyhow, my father was highly delighted with the amount, chuckling “He’s a rum ‘un, old Jack ….” as we both struggled to decipher what was inscribed on a piece of wallpaper. With the upsurge in trade he was unable to deliver it all on foot, so Mr Hartley helped out with his Lanchester.’

‘So nearly every morning my father and Jack Millichips, with me wedged in between them, would journey forth with a cargo of pickles. Jack would drop off at a district he hadn’t visited for some time and canvass for orders in the shops until opening time and then apply his talents in the pubs until closing time.’

‘Sometimes in the late afternoon, as we rattled home with a load of empties, he could be seen waiting at a tram stop or sauntering down the road. He had rather a distinctive mode of progression, with his feet at ten-past-ten, hands in trousers pockets and his left shoulder hunched before him. When I remarked on this peculiarity my father explained, “He got like that through pushing pub doors open.”

‘Jack’s invariable reaction as we pulled up would be to turn in a dignified manner with a bland face and with hands spread apart, palms downwards, just like Sidney Howard, he’d enquire: “What’s to do?” This never failed to make me laugh, particularly so when to complete his performance he took a penny from behind my ear and presented it to me with the admonition, “How long is it since you washed ‘em? Look at the date on this ….” His gentlemanly demeanour and affable nature gained him many customers. Lady shopkeepers, especially the unmarried ones, and public house landladies were an easy prey to his charm, as was evident by the amount of orders he obtained.’

Trips in the Van

‘Another of his attributes was an unrivalled knowledge of Sheffield and district, which he freely imparted to Dad and me. Dad stopped every few yards and took jars of pickles into shops and to the back doors of pubs, whilst Mr Millichips stayed in the van with me. I believe there was a tacit understanding between my father and him that it was his position as head salesman to accept orders for goods but undignified for him to deliver them.’

‘One evening I strolled aimlessly along Moore Street and decided to have a quick one in the Earl Grey. It was only just turned eight o’clock on the big timepiece over the door, but already quite a few customers were standing at the bar. I got a pint of Tennant’s bitter and took a seat in the little bay window snug looking out on to Ecclesall Road.’

‘A man, the only occupant, gazed at me rather vacantly until mutual recognition dawned. It was Mr Millichip, my father’s one-time traveller, salesman and friend of my boyhood. He was smartly clad in a brown suit, stiff white collar and a knitted tie, but he himself was rather the worse for wear. His eyes were glassy and his speech slurred as he greeted me with tipsy familiarity.’

‘Ar do, Georgie, housh it goin’?’ I sat on a stool opposite to him and enquired what he had been doing, as I hadn’t seen him for years. ‘Awl reight,’ he proudly replied, ‘Ar went back inter big worksh an’ arve bin gerrin some good money.’ I noticed that his cap, a snappy eight-panel job, was resting on his head at an unusual angle, the neb being in the region of his right ear.’

‘Before I could comment on this, he took a long swig of beer which emptied his pint pot, then he took off his cap, threw it up in the air, caught it and replaced it on his head and gave it a clockwise turn, rather like tightening a nut, so that the peak pointed backwards.’

‘On completing this manoeuvre, he remarked with great satisfaction, ‘Happy landingsh!’ The landlord, Billy Downes, watched this performance with amusement and approbation, as he pulled another pint for Jack. I went to the bar to fetch it and asked Billy what was going on. ‘Oh.’ he chuckled, ‘Owd Jack carried on like this every birthday. When he downs a pint, ‘e gies ‘is cap a turn. It gus round ‘is ‘eead six times befooar it’s back weear ‘e started. This is second time round. It dun’t do any ‘arm, but it does me a bit o’ good.’