You are here: Home>Explore OUR Broomhall>Topics>Art>George Cunningham: Characters of Broomhall ~ Part 15 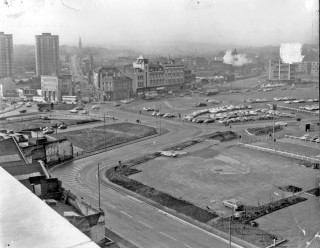 An Outing with Sid

‘Franklin’s shop was a welcome beacon. Then just as we reached the corner the Co-op turned on its lights. I gasped and blinked, dazzled by the brilliance of the tower and clock picked out in green and red and all along the front of the huge building baskets of flowers and long streamers glowed with light.’

‘Graham’s new furniture shop had a little crowd round its windows but just past it my father sucked a hollow tooth, a habit of his when he had to make a decision. Wigfull’s corn and flour store was still open, with sacks of grain, dog biscuits, maize and chicken feed spilling out on the pavement. It was an old building with wooden rafters and shelves sagging with age and as I peered inside a pair of sharp eyes glinted at me from behind a box, then vanished into the gloom.’

Outside the Punch Bowl

‘Next door, outside the Punch Bowl, a stall had been set up, well lit with a naphtha flare. In the glare now lighting people’s faces, then casting them into shadow, I could see a man hold up a bottle taken from the dozens on the table and hear his voice above the noise of the trams. “This embrocation will relieve rheumatic pains, sooth sciatica, cure backache…” The crowd pressed forward, some of them holding money in the air, eager to try this panacea.’

‘Further on we paused to look at the fireworks in Brock’s window and listened to the butcher outside Ted Wild’s shop. “Here you are, ladies, half a shoulder o’ lamb for half a crown and I’ll wrap it up for you wi’ half a pound o’ sausage.” The ladies, hardened by years of thrifty shopping, enjoyed the patter but most of them drifted away, knowing that they could come back later and perhaps get an even better bargain.’

‘A man with only one arm limped along in front of us. He was clad in an old khaki greatcoat and he went into every shop doorway picking up tab-ends.’

‘Inside, all was warmth and light; brass taps on large colourful pot jars conspired with the huge copper urn which was simmering gently at the end of the counter holding forth the promise of any number of drinks, hot or cold.’

‘I felt much warmer when we came out and joined the throngs of people walking up and down the Moor on their way to the pictures, the theatre or the pubs. Trams swayed and clanged along, filled with dim faces behind misted windows. The butchers were shouting themselves hoarse outside their shops, appealing to the passing crowds to avail themselves of their never-to-be-repeated generosity.’