You are here: Home>Explore OUR Broomhall>Topics>Art>George Cunningham: Characters of Broomhall ~ Part 12 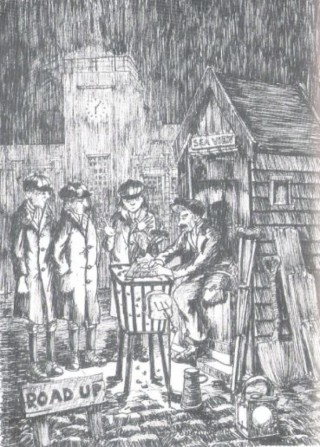 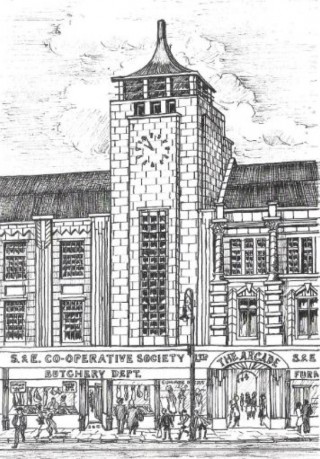 Illustration of the Co-op taken from "By George! My childhood in Sheffield." Page 51. 1987
Photo: Paul Hibbert-Greaves 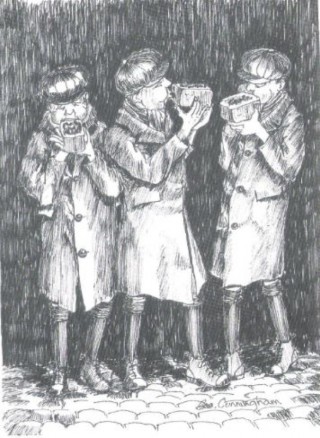 George and his friends meet a street character:

‘The frost burst a water pipe outside Sweetmeat Joe’s spice shop in Clarence Street and made necessary a large hole, smoky paraffin warning lamps, a night watchman complete with box and, best of all, a large coke brazier. Vinny, Norman and I soon established friendly relations with the guardian of the hole, who said his name was Ernest Watchorn. He told us this when I asked him, as I was always inquisitive about people’s names. He gave a little chuckle when I remarked brightly ‘It should have been Watchfire, because that’s what you do!’

‘A sparsely-built man with a long nose, sunken cheeks, a quiff of hair beneath his cap neb and a bushy moustache, he had some difficulty in sitting down and getting up. This was due to the fact that he had only one sound leg, the other ending above his knee, the stump covered by his pinned-up trouser leg. As our acquaintance blossomed into friendship, he confided to us that he had ‘Copped a packet on Somme’ and that he had been fitted out with an artificial leg, but couldn’t get on with it.’

‘Once upright he could move at a surprising speed with the assistance of a crutch – of which he seemed very fond, because every now and then he bestowed on it a friendly rub with a large red-spotted handkerchief, in which he also used to carry his dinner basin. Inside his hut, wrapped in sacking, he kept a shovel, the blade of which was brightly polished and greased with dripping.’

‘Promptly at six, by the Co-op clock, Mr Watchorn raked the brazier into a steady glow and, with the aid of a steel spike stuck in the ground, placed the shovel on the fire. From a biscuit tin he produced four rashers of bacon, two thick slices of bread and an egg. He laid the bacon in the form of a square on the blade of the shovel, winking one eye mysteriously at our inquiring looks.’

‘A toasting fork, made from twisted wire, held the bread up to the heat, the bacon, spluttering nicely and sending out a mouthwatering aroma, was turned with the aid of an army knife, and into the four-sided square of bacon Mr Watchorn deftly cracked the egg. The toast was done only on one side and on the other the bacon and egg were neatly slid off the shovel and entrapped between the two slices. A mashing can full of water with tea, condensed milk and sugar in it was suspended over the fire to be ready when Mr Watchorn had finished his sandwich.’

‘Ever made a winter warmer?’ A shake of the head from me, a blank look from Norman and a non-committal suck of teeth from Vinny convinced our host that we didn’t know what he meant. The materials were readily available. We each gouged a lump of clay from the hole and under Mr Watchorn’s instructions fashioned an open-topped box about the size of half a brick. At one end a hole was made with a finger, then the creation was laid near the fire. Impatiently we waited as Mr Watchorn carefully pinched the clay, testing it for hardness. At last he nodded his head. ‘They’re abart reight,’ he informed us and from the back of his hut produced some kindling wood broken off a gatepost in an advanced state of dry rot. This he carefully shredded into our boxes, making sure the hole was free.’

‘With a spill of paper he lit the kindling, handing the boxes to us, one at a time. ‘Na then!’ he ordered, ‘Blow!’ Not too hard, else y’ll blow bloody lot art, ‘n fer Pete’s sake, don’t suck.’ We puffed and puffed and soon a friendly glow and then a lovely warmth spread through the box. What with this and the heat from the brazier, the goose grease had started to melt and run down my stomach giving cause for some enquiring sniffs from Norman and Vinny. I was basking, baking and blinking in a delicious euphoria, my overcoat buttons almost too hot to touch, when through the shimmer of heat above the fire I saw on the Stores clock that I should have been home half an hour ago.’

‘Bidding a hurried farewell to my friends, I dashed up the street to Michael Road. Our doorknob had always been a bit wonky, so I shoved the winter warmer in my coat pocket to enable me to use both hands. I mumbled some excuse to my father and mother and hung up my coat behind the door on the cellar head. I started to tell them about my new-found friend, the night watchman, but they were listening to ‘Stainless Stephen’ on the wireless and shushed me into silence, so I sat quietly reading The skipper.’

‘After a few minutes I was nodding off, when Dad started up from his chair, rushed across the room and flung open the cellar door. Smoke and arid smell of burning cloth made him cough and brought tears to his eyes as he held up my coat and pulled out the winter warmer and what was left of the pocket lining. I was sent to bed with no supper, admonished by my parents and a complaining chesty chirrup from Charlie the canary. Next day though, at school, I was the centre of attraction, showing off the burnt hole and casually remarking that last night we’d had a fire at our house.’