You are here: Home>Explore OUR Broomhall>Topics>Art>George Cunningham: School Life ~ Part 3

Back to School After Six Months 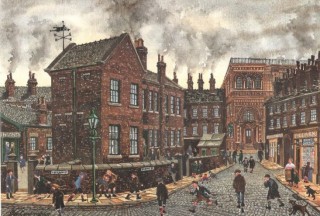 Illustration of Hodgson Street and Young Street taken from "By George! My childhood in Sheffield." Page 15. 1987
Photo: Paul Hibbert-Greaves

George was ill and had to spend a long period of time at Lodge Moor and then when arriving back home at Michael Road he could not go back to school. However, when he did the same characters appeared to welcome him back or not!

Back to School after Six Months

‘The morning dawned when I had to go back to school. Our weekly visits to the clinic ended with me being discharged, which pleased my mother and father but left me in some trepidation as to my future. I went early, before the first bell and hung around Havenhand and Lewis’ window watching as the playground started to fill up.’

‘One by one I saw familiar faces and started to feel less uncomfortable. Harry Flathers, taller than ever in a pair of his father’s trousers cut off at the knee, welcomed me: “Ahm reight glad tha’s cum back, Jud,” he exclaimed. “Ahm still in same class as thee, so I’ll see that ah get behind thi.” And so I found that the desks were as hard and cold and ink-spattered as they had always been, the map of the world hadn’t altered, Owd Pew’s teeth and shoes gleamed as brightly as ever, Mr Barwell’s eyes still pierced my inner soul and Dicky Tomas was firmly in charge of our class.’

‘He gave a flicker of recognition as I answered my name when he called the register but made no comment and I was glad that he didn’t pick on me with any questions during the Scripture lesson. We went on to Composition in which we had to write about what our fathers did for a living or did do when they had a job. This I found fairly easy and I managed to fill a page of my exercise book, but the next lesson, Geography, proved more difficult and then came the dreaded Arithmetic.’

‘Mr Thomas came down in between the rows of desks, his expert eye running down the papers as he crossed or ticked, frowned or nodded approval. He picked up my grubby sheet, stroked his chin then with a decisive gesture struck his pen right down the entire column of sums.’

“Every single one wrong, Cunningham,” he informed me, but not unkindly. “I suppose there is some excuse …. You’ll have to pull up your socks and try and do better.” I breathed a sigh of relief, thankful that I’d got away with it until from behind me I heard a snort of annoyance and my paper was snatched up by Mr Thomas who held it at the side of Harry Flathers’ effort.’

“Remarkable! A fine example of team work, you’ve got every sum wrong with exactly the same mistakes. Now boys, how do you think that could happen?” The wheedling quality of his voice with its Welsh accent was a sure sign that his temper was rising. “Ah doan’t know, sir,” moaned the unfortunate Harry. “Well, if you don’t know, sir,” mimmicked the irate teacher, “perhaps this will help you to remember not to copy again – hold your hand out!”

‘With his paw extended the miscreant shambled to the front of the class where Mr Thomas with great accuracy born of long practice gave him three finger-burning cuts of extreme velocity from a whippy cane. Flathers staggered back to his desk, his face a mixture of anguish and defiance changing into an accusing glare when he passed me, his stricken hand tucked under an armpit to alleviate the pain as he slumped down into his seat, a picture of abject disillusionment.’

‘Thankfully, playtime came at last and we streamed out into the yard. I hadn’t been in a crowd of schoolmates for such a long time and had forgotten how to use my elbows. Already I was missing the freedom I had enjoyed for so many months.’

“Nah then!” growled the once familiar and dreaded voice of Jimmy Wrathfull. “Wud tha like a spin on thi first day back?” His grasp tightened as I cringed and looked appealingly at Harry Flathers who was standing nearby. He stared back at me, sniffed and walked away. Jimmy, summing up the situation, took full advantage of his good fortune and gave my ear a hard painful twist as if to wind me up before he started whirling me round at arm’s length.’

‘Faster and faster I went, faces became a blur and it seemed as though my feet would leave the ground when suddenly he let me go. I spun in a circle, reeling and dipping in a desperate fight to keep upright, when my hand which still clutched the stones flailed round and thumped Jimmy Wrathfull squarely on the nose. I felt it give under the impact and his mouth gaped open in shocked disbelief as he put a hand up to the injured organ. The playground was still unsteady beneath my feet as I swayed, too dizzy to run, before my tormentor.’

‘I was surrounded by a gang of admirers, besieging me with questions: “’As tha been ‘avin boxin’ lessons whilst tha’s been off schoil?” “Show us ‘ow tha ‘it ‘im.” Even Harry Flathers, no mean judge in these matters, eyed me with new respect as the whistle blew and we went back into school.’

‘At dinner-time I walked back home along Moore Street with mixed feelings. I felt frightened and guilty at the damage I had wreaked on Wrathy’s nose but a little spasm of elation crept in as I remembered the effect it had on him and the new prestige it had given me. The smell of newly-baked breadcakes cooling on Mrs Windle’s windowsill sharpened my appetite and the two ha’pennies jingling in my trousers pocket cheered me up, so that when I got into the house and my mother asked me how I had go on at school. I replied: “Alright, Mam, what’s for dinner?”