You are here: Home>Explore OUR Broomhall>Topics>Art>George Cunningham: Childhood Memories ~ Part 2

Whitsuntide and their favourite meeting place 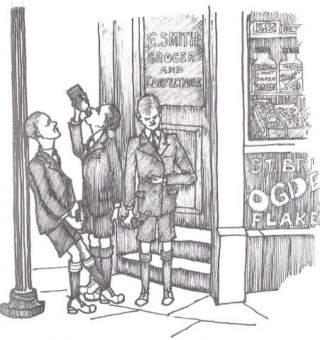 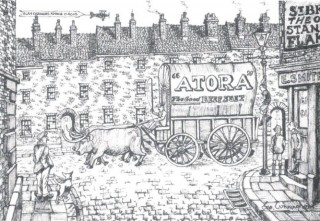 Whitsuntide was a big event for George and his friends as they got a new outfit and they had a special ritual which they did on Whitsun Sunday!

‘Whitsuntide was the next big event on the calendar and mother bought my brother and me identical suits of Derby tweed, thick and hard wearing, warm in winter and baking hot in summer and guaranteed to last at least two hand-downs. I don’t know how she had managed to afford them but every Friday a tall lady with a big black handbag visited us and Mam gave her some money.’

‘The night before Whit Sunday, I said my prayers and added an extra one for it to be a fine day. I fell asleep working out of list of people I would call on and what I would do with all the money if only it didn’t rain, because no other day would do. My fears were groundless. The morning dawned warm and sunny, and I took extra care with my morning toilet, the aroma of carbolic soap blending pleasantly with the smell of bacon frying on the gas ring at the side of the sink.’

‘After breakfast we were kitted out in our new tweeds. Bill was off as soon as he’d got his boots on, but I took my time, revelling in the newness of everything, even my braces. Dad showed me how to adjust the little metal clips and to add the finishing touch to my appearance he allowed me to use some of his lavender scented brilliantine out of the oval tin he kept at the side of the mirror. Out on the street I clomped in my new shiny and creaking leather boots into the next yard to call for Norman and Vinny.’

“Ah’ll not be a minnit,” called Norman from the water closet in which he spent a lot of time at weekends due to the administration of his mother’s favourite laxative, a cocktail of liquorice powder and senna pods. Vinny appeared with hair slicked down, resplendent in grey flannel and we waited at the bottom of the passage until Norman emerged, rather palefaced, in a brown suit and shoes to match. We looked each other up and down, smugly satisfied with our appearance and set off on the time honoured ritual of Whit Sunday.’

‘Although none of us ever remembered being told anything we knew exactly what to do. My first call was at Mrs Woofinden’s back door at which I gave the approved rat-a-tat and waited, straightening my tie until she opened it and I greeted her with the immortal word “How d’y’ like mi new suit?” The response was traditional and adhered strictly to rule with an inspection of the new outfit and an approving: “Yes, it’s very nice, luv, here you are ….” Whereupon, a penny was placed into my top pocket and with a mumbled “Thank y’ missis,” I moved on to another house.’

‘After a few calls I could feel the satisfying bulk of my easily acquired wealth weighing rather heavily so I nipped into Dewsnap’s entry for a quick count up. Nine pennies, five ha’pennies and a silver threepenny bit donated by Mr Malyan, who had been over generous after his Sunday morning’s tots of whisky in his tea. This was indeed a fortune and later when I met Norman and Vinny we compared our gains and walked along the street jingling the coins in trousers pockets, I felt like the Man who broke the bank at Monte Carlo.’

The sun was high in a clear blue sky and a warm breeze stirred the dried horse muck and blew dust over my new black boots, necessitating a quick rub up and down on the backs of my stockings. With one accord we crossed Clarence Street and knocked on Mrs Dean’s back door, feeling the heat inside our suits and the tightness of new collars and licked our lips in anticipation.’

‘Mrs Dean, who always seemed to be smiling, gave us each a penny. “Can I have a bottle of ginger beer, please?” I asked, proffering a halfpenny which was the going rate for the delicious fizzy home-made brew. She went on to her cellarhead and gave us each a dark thick green glass Guinness bottle. “No, I’ll treat you to these, just see that I get the empties back,” she said, and refused to accept any payment.’

A Place to Stand!

‘Over on the steps of Smith’s corner shop we stood, not wanting to get any donkey stone on our trousers. The bottle was smooth and cold in my hand and I savoured the moment before undoing the string to release the stopper. I gurgled the foaming nectar down my throat, gasping for breath at its sharpness and squirmed with delight at the bubbles tickling up my nose. I leaned back against the gas lamp, belching just enough to keep the effervescence rising and thought that this must be how millionaires must feel, drinking champagne, with pockets full of money.’

Norman returned the empties and came back with a handful of dolly mixture, Mrs Dean’s reward for the bottles. Vinny made him turn out his pockets to make sure he hadn’t pinched any for himself and then we split them into three equal lots. The morning was almost over and the unwritten rules forbade more collecting or playing any street games that would violate the sanctity of Sunday afternoon.’

‘After dinner I changed into my everyday clothes which had been last year’s best and indulged in a glass of my favourite tipple, Eardley’s dandelion and burdock. Pleasantly full, I wandered out into the street and sat on our backyard wall, enjoying the freedom of old familiar togs and the warmth of the sunlit stones against the back of my bare legs.’

‘Not a sound disturbed the stillness, no cartwheel or iron-shod hoof clattered over the cobbles. Pickering’s canvas covered vans rested behind the big wooden green gates at the end of the street, patiently waiting to be filled with Monday morning’s cargo of cardboard boxes. My sole companion was Wells’s Irish terrier who lay blinking in the entrance to the yard opposite me, occasionally having a half-hearted scratch and a nibble at some parasitical lodger.’

‘Smith’s corner shop was closed and silent behind dark blue blinds and the enamelled St Bruno advert glinted in the sun reflecting its light across the road onto the side of our house. Behind the shop were the living quarters of Mr and Mrs Smith and you could get anything such as a bag of sugar or a tin of salmon for Sunday tea from the back door after hours. I couldn’t pluck up the courage to disturb their afternoon’s rest by knocking and asking for a ha’porth of nut brittle even though the pangs of hunger were already beginning to make themselves felt.’

‘Smith’s doorstep was our relievo starting spot and it also came in handy for sharpening the wasters we got from the back of Richard’s penknife factory in Broomhall Street. It’s main function, though, was a meeting place for our gallant band – Vinny, Norman and me as founder members – and also because the top step could only accommodate three in comfort. Lit by a gas lamp in winter and warmed by the sun in summer, on its worn stone decisions were taken, serious matters discussed, expeditions planned and often carried out.’

‘So it came about one Saturday morning we were sitting there. Norman was very impressed when I told him about the bacon slicer and how my Dad had poo-pooed the idea of rockets to the moon, but Vinny, who because he took the Meccano Magazine and had been given a Boys’ Own Annual for his birthday considered himself better informed than us about such mechanical marvels, sucked air through the gap in his front teeth. ‘Just wait,’ he said, ‘It’ll not be so long before everybody’ll have a car or even a plane. There’ll be no more houses and carts blocking up streets.’ To me this sounded rather disturbing, as I still derived some income from Moxay’s manure business.’

‘At that very moment, as if to belie Vinny’s words, a distant rumble of wheels on the cobbles grew louder. It was obvious that something much heavier even than a railway dray was coming towards us, and I stood on the top step for a better view, whilst Norman tried to shin up the gas lamp. Vinny made out that he wasn’t interested by looking up in the sky, but even he was startled when around the corner from Moore Street came a pair of oxen pulling a large covered wagon.’

‘Ponderously, the huge horned beasts, their doleful-eyed heads swaying in a slow rhythm from side to side, ambled towards us down Clarence Street. The driver perched aloft with both feet on the buckboard, held up his whip in what could have been a salute, or what was more likely a warning to us not to jump up behind. The wagon’s canvas sides, as high as the bedroom windows they were passing, had the words ‘Atora Beef Suet’ emblazoned in large letters.’